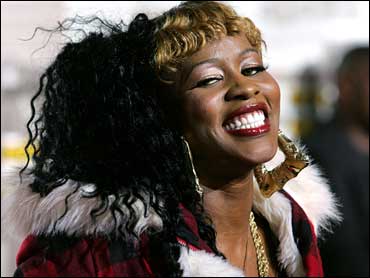 Grammy-nominated rapper Remy Ma, free in $250,000 bond after being accused of shooting an acquaintance, does not have to post more bail money despite more problems with the law.

A judge said Wednesday she was denying a prosecutor's request to hike Remy Ma's bail following her new indictment on witness tampering and gang assault charges. The judge said she could change her mind later.

The new charges stem from an Aug. 19 assault on a witness's boyfriend in a Bronx nightclub. Remy Ma, 26, is accused of causing several of her male friends to attack the man, blackening an eye and breaking a bone in his face.

The assault followed an exchange in which Remy Ma told the man, "Your girlfriend is changing her (cell phone) number on me and people are taking the (witness) stand," Assistant District Attorney Jason Berland told the court.

Another man who was with the witness's boyfriend was beaten by the same group, Berland said. The man suffered a broken jaw, has a metal plate in his face and will not be able to eat solid food for months, he said.

Remy Ma, whose real name is Remy Smith, is the only person who has been charged in the nightclub beatdown, Berland said. The victims reported that they covered their faces to protect themselves and did not see who hit them, he said.

The prosecutor said he was asking state Supreme Court Justice Rena Uviller to increase the rapper's bail because her legal situation had changed and "as we get closer to trial, the defendant may be a greater flight risk."

The defendant's lawyer, Ira Fisher, said his client will surrender her passport. He also said she would never flee because her bail bond was secured by the Cliffside Park, N.J., home of her "old and dear friend and manager."

Fisher said his client has pleaded not guilty to all the charges.

The prosecutor said Remy Ma had tried to contact witnesses to the July 14 shooting, "not trying to encourage people to come forward and tell the truth, but trying to discourage people from taking the (witness) stand."

Berland said the shooting occurred after Remy Ma left a birthday party in Greenwich Village, claimed that $2,000 was missing from her purse, and accused Makeda Barnes-Joseph of taking the money.

With a .45-caliber pistol in her hand, Remy Ma got into Barnes-Joseph's car, told her to dump the contents of her purse and, after a struggle, shot the woman twice in the abdomen, Berland said. She was hospitalized for 16 days.

The defendant surrendered to police the next day, Berland said.

Remy Ma, a Bronx native, was nominated for a Grammy as part of the Terror Squad for the 2004 summer smash "Lean Back." She also earned the Best Female Hip-Hop Artist award at the 2005 BET Awards.

Besides her solo career, she has appeared on recordings with performers Fat Joe, Eminem and R. Kelly, according to a biography on her Web site.