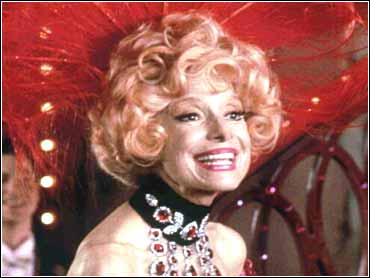 Carol Channing's signature dress -- a shimmery number she wore in the stage production of "Gentlemen Prefer Blondes" -- was stolen Thursday as she checked into a Hollywood hotel.

The 86-year-old actress and her husband were checking into the Hollywood Renaissance Hotel when an unidentified man swiped one of her bags from a bell cart in the lobby around 12:30 p.m., said Officer Jason Lee, a police spokesman. The bag contained the dress, which Channing told police was valued at $150,000, Lee said.

Along with her platinum bob and distinctive voice, Channing was well-known for her role as Lorelei Lee in "Gentlemen Prefer Blondes" and as Dolly Gallagher Levi in "Hello Dolly."

Her representative told TMZ.com that dress was on its way to the Smithsonian museum for an exhibit, along with her 1964 Tony award for "Hello Dolly." The award was in a different bag.

"I'm not crying about it. I didn't know it was such a historic specimen," she told local media. "The Smithsonian was crying."

Lobby video surveillance capture the theft, showing a man with the bag exiting the hotel. The suspect, who was wearing shorts and a T-shirt, walked into the hotel, stole it and left, Lee said.

"We want the dress, we don't want him," Channing said.