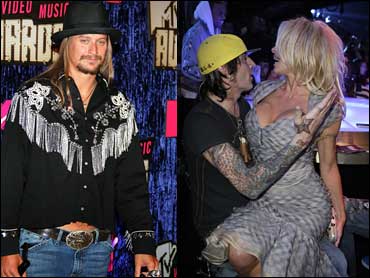 Kid Rock was cited for misdemeanor battery after a tussle with Tommy Lee in the audience at the MTV Video Music Awards, police said.

The rock-rapper received the citation after police reported to the Palms Hotel and Casino shortly after 10 p.m. Sunday and interviewed people at the scene, Officer Bill Cassell said.

Kid Rock was not taken into custody, he said.

MTV VJ Sway said on the post-show that he saw Kid Rock walk up to the Motley Crue drummer, who was sitting next to Diddy, and "deck him." The incident was confirmed by Palms Hotel and Casino public relations representative Larry Fink.

Both Lee and Kid Rock are ex-husbands of Pamela Anderson, who was a presenter at the show and delivered her lines from atop a table in the audience. Although it was not clear whether the two rockers were fighting over Anderson, it was hard to imagine another scenario.

Another eyewitness, rap producer Rich Nice, said although Kid Rock threw the only blows that landed - a backhand slap and a punch - Tommy Lee was the instigator.

"It looked like Tommy Lee initiated it because Kid Rock was ignoring him," said Nice, who was two tables away. "And Tommy Lee kind of antagonized him. And then when Tommy Lee stood up, it looked a little weird, like 'Yo, what?'

"When Tommy stands up is when Kid hit him the first time with a backhand. And then Tommy Lee looked like he was trying to get at him to aggressively retaliate and then Kid Rock hits Tommy Lee again - bong. And then security grabs Tommy Lee in a headlock and pulls him off."

Security guards let Kid Rock stay for the rest of the show while Lee was dragged out.

Cassell said Kid Rock could face up to six months in jail, but that it would be uncommon for someone facing similar charges to receive such a lengthy sentence.

The incident provided a lot of mock rebukes from the hip-hoppers in attendance.

"They say it's only rappers," said Sway. "I told you rockers fight, too."

Diddy noted: "It's not just the hip-hop artists that sometimes have a problem."

Jamie Foxx took it further: "Stop all this white-on-white violence."
By RYAN NAKASHIMA