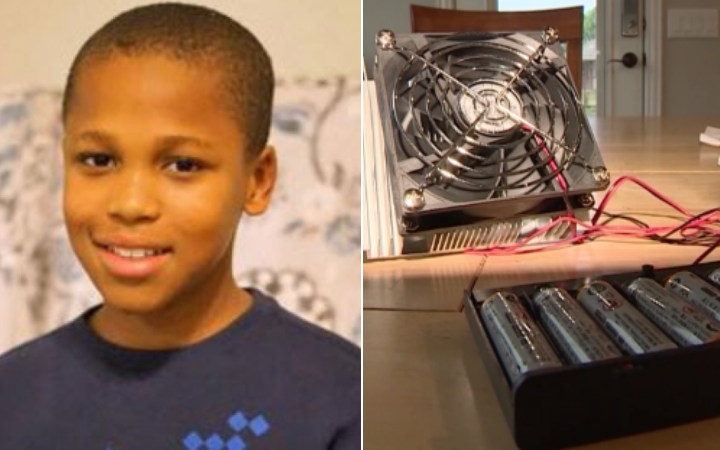 He may be only 11 years old, but Bishop Curry is already working on a solution to a major problem plaguing the country: the tragic deaths of young children in hot cars.

A year ago, the McKinney, Texas, boy saw a local news report about a 6-month-old in his neighborhood who died after being left in a hot car. Within hours after learning the upsetting news, Bishop created a prototype of a device he believes could have saved the child's life.

"It made him sad, and at that point, the wheels started turning in his mind," Bishop's father, Bishop Curry IV, told CBS News. "He came up with a way to prevent it from happening."

As soon as Curry walked in the door from work that day, his son ran to share the news, holding up a wrinkled piece of notebook paper scribbled with detailed plans for his invention, which he calls "Oasis."

"When he showed me that sketch I was so proud of him for thinking of a solution," Curry said. "We always just complain about things and rarely offer solutions."

Young Bishop originally designed a fan that would automatically turn on when it detects the inside of a car has reached a certain temperature. The device would be placed on a headrest -- in the front or rear, depending on the age of the child and where their carseat is facing.

"The device detects if vehicle comes to stop, using GPS technology," Curry explained. "It then detects if a child is in that car seat, and if the car is heating up. If all of those things are taking place it blows cold air on the child through an internal cooling system."

But the sixth-grader didn't stop there.

He also wanted to find a way to get the child rescued from the dangerous situation. So, he added Wi-Fi as well as GPS technology.

If the fan is activated, a built-in antenna will then use the Wi-Fi to contact the child's parents. If they don't respond, it will alert local authorities.

"It will provide the location of the child with the GPS," Curry added.

With help from a GoFundMe campaign that has raised nearly $40,000 since it launched back in January, Bishop was able to get a provisional patent and build a 3-D model of the device.

His dad, an engineer at Toyota, even pitched the idea to his company.

The auto manufacturer was so impressed, they sent the boy and his dad to the Center for Child Injury Prevention Conference, where Bishop presented his idea to car seat manufacturers.

Several manufacturers showed interest in the product, but Curry says no decisions have been made. The device would still need to undergo testing and modifications before it's ready to hit stores.

Since the conference, both father and son have continued spreading the word about the device and the importance of car safety.

An average of 37 children die each year in hot cars, according to the safety organization Kids and Cars. Since 1994, 804 children have died from heat-related illnesses in cars in the U.S., the group reports.

"No parent is perfect. I make mistakes every day as a parent, but if you make this mistake -- that's a mistake you can't say sorry for or take back," Curry said.

With the Oasis, Curry believes these accidents could be prevented.

"This device is designed to buy time and give parents a second chance to run out and get their kids," Curry said. "He's trying to delay a tragic event by doing something that really makes sense."

Boy with autism who wished for friends goes viral
More