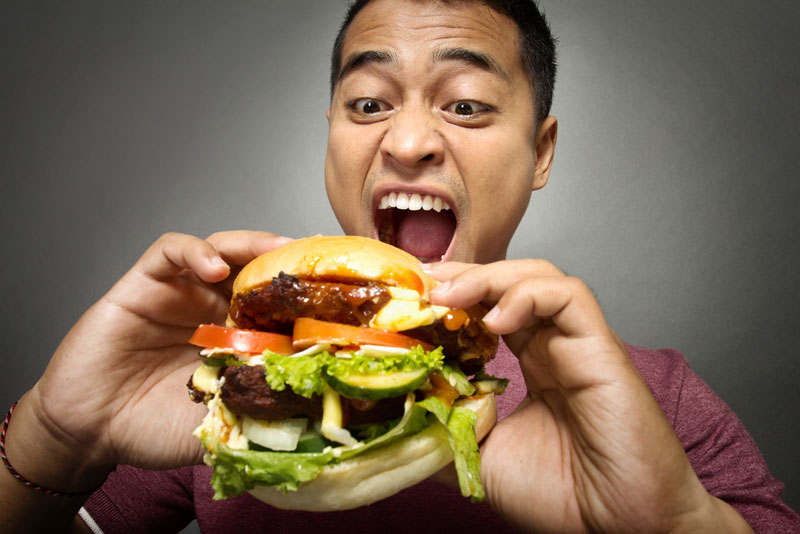 A group of healthy guys recently took on a task some people would envy: They consumed 6,000 calories a day, for science. Now, as a result of this study, scientists say they have a better idea of why people who are obese also tend to develop diabetes.

In the study, six middle-age men who were either normal weight or only slightly overweight volunteered to start eating double what they typically consumed in a day, so they would rapidly gain weight. The men were also confined to hospital beds so they would not get physical activity.

After a week of eating 6,200 calories a day -- with a diet rich in carbohydrates and fat that included foods like hamburgers, pizza and cookies -- the men gained nearly 8 pounds (3.5 kilograms), on average. All of this added weight was fat. [7 Biggest Diet Myths]

The researchers were interested in learning how obesity triggers insulin resistance, a condition in which the body's cells stop responding to the hormone insulin. Because insulin helps blood sugar get inside cells, insulin resistance leads to a buildup of sugar in the bloodstream, and can cause type 2 diabetes.

Scientists have a number of theories for why obesity leads to insulin resistance, including that obesity increases fatty acids in the blood, or promotes inflammation. But these changes may happen only after a person has been obese for a long time.

The new study allowed researchers to see what happens when a person is in the very early stages of obesity, and to pinpoint the first step in insulin resistance.

In the study, the men developed insulin resistance after just two to three days, the researchers said.

The GLUT4 changes may have impaired the ability of this protein to respond to the hormone insulin, thus leading to insulin resistance, the researchers said.

"We may have found the initial events that are responsible for the insulin resistance," said study researcher Salim Merali, a professor of pharmaceutical sciences at Temple University in Philadelphia.

The new findings suggest that treatments that use antioxidants might help prevent insulin resistance, Merali said.

However, future studies are needed to confirm this hypothesis and to see whether oxidative stress causes other changes that contribute to insulin resistance, the researchers said.

The study is published Sept. 9 in the journal Science Translational Medicine.