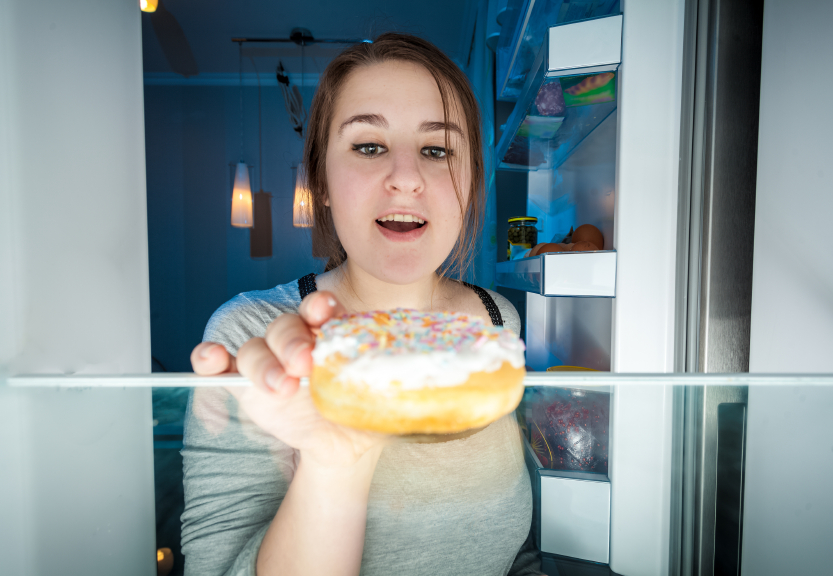 It's that time of the night again. You're all riled up from the final outrageous scene of "Scandal," and suddenly find yourself in the kitchen raiding the refrigerator or pantry for something salty, fatty or sweet. But what's the damage from giving into your late-night chocolate-covered pretzel compulsion?

A new study adds to a growing body of research that suggests it's not just what you eat, it's when you eat that may cause you to pack on the pounds. According to researchers at the Salk Institute, restricting food intake to an 8- to 12-hour period during the day may help prevent high cholesterol, diabetes and obesity. Essentially this means that if you must have those pretzels, eat them at noon, not at midnight.

The study, published Wednesday in the journal Cell Metabolism, used a mouse model to demonstrate the effectiveness of a time-restricted eating strategy for maintaining a healthy weight. Though it has yet to be tested on humans, the researchers are optimistic it could help a person stay trim as well.

In 2012, Dr. Satchidananda Panda of the Salk Institute fed a high-fat diet to mice, but only during a restricted time-frame of eight hours in the day. He discovered the mice that ate a time-restricted diet were healthier and leaner than those given access to the same high-calorie diet continuously in a 24-hour period.

For the Salk Institute's newest study, Panda and his team used a variety of diets on 400 mice with weights ranging from healthy to obese. The researchers fed the rodents a variety of diets, with some only receiving food during a short window of time. The researchers found that regardless of the diet they were fed -- high fat, fat and fructose (a type of sugar), or just fructose -- the mice that ate during the 9- to 12-hour window of time gained less weight than the mice that were given a constant supply of food for 15 hours a day, even when both groups consumed the same amount overall. Additionally, the mice that ate a high fat diet in cycles of 9 to 12 hours were all lean. The mice in the 15-hour group did not demonstrate the same level of weight loss.

Time-restriction diets also appear to aid weight loss in a significant way. At one point in the study, the researchers put the obese mice that were eating all the time on a 9-hour time-restricted diet and observed they lost 5 percent of their body fat within a few days, even though they were given a diet with the same caloric and fat content. Additionally, the mice that ate a non-restricted diet on the weekend but stuck to the time restrictions during the week also didn't get fatter.

But Dr. Stephen Ginsberg, an associate professor of neuroscience at NYU Langone Medical Center, research scientist at the Nathan Kline Institute for Psychiatric Research and an expert on the science behind calorie restriction, is hesitant to draw that conclusion that this strategy can work for humans as well.

"There's something to be said for tolerability. To say to people, 'Oh, it's ok to be on a diet during the week and then go nuts for a few days,' I don't think you can equate research to that," he told CBS News. "It's really, really hard to translate this because our eating patterns are very different and our digestive patterns are really different."

It's still not completely understood why a time-restricted diet appears to control weight, at least in mice. But the authors of the study believe it has to do with the cycle of burning and breaking down fats and cholesterol in the body. When one eats frequently, the body continues to make and store fat and fat cells, which damages the liver. In turn, the liver also continues to produce glucose which raises blood sugar levels. But time restriction optimizes the use of fat, glucose and cholesterol at a faster rate and keeps the liver functioning.

Ginsberg also thinks the diet may work because humans are biologically hard-wired for hunting and gathering, which means there are periods of feast and famine, quite the opposite of life in the modern world where popcorn and candy go with the movies, family gatherings include large dinners and dessert arrives after supper -- sometimes in the form of a pint of Rocky Road.

"The easiest way to put on weight is to eat at night and then go to bed," he told CBS News. "Your metabolism changes throughout the day and you use the most energy in the morning. What do you do after dinner? You watch TV and you're more sedentary. The choices of foods and beverages that people have at night have more calories."

The country where Down syndrome is disappearing
Jessica Firger