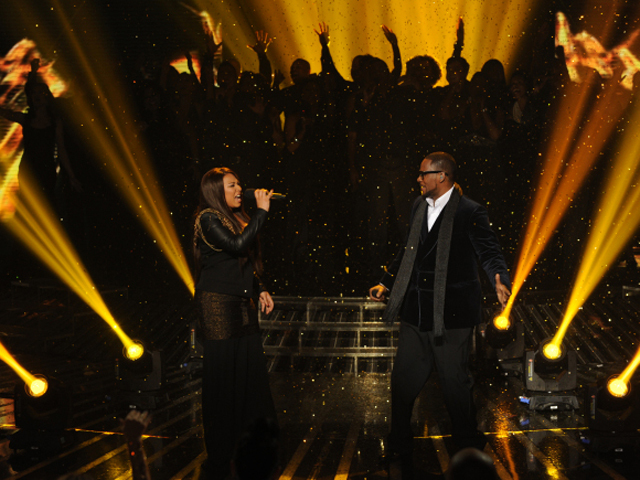 Wooster's Josh Krajcik, Santa Cruz' Chris Rene and Sunrise's Melanie Amaro, should they succeed here, would get a $5 million contract and untold immortality. All they had to do in last night finals was sing a couple of songs well. Which wasn't as easy as it sounded. In fact, it ended up sounding not so easy at all.

Krajcik began uncertainly, with a peculiar gray wood as his backdrop. What was this eerie place? Tim Burton's back garden? What was this eerie song? Why was Krajcik halting? Oh, Lordy, he had to do double duty as a presenter. For there he was, breaking his song to introduce Alanis Morissette. They then dueted her hit "Uninvited."

For most of it, Krajcik was a gatecrasher. It was as if he was a mere backup singer allowed a few seconds with the star. It's a miserable enough song as it is. But this was entirely out of place for a show that's supposedly to create paroxysms and heart attacks.

"That was surreal," said L.A. Reid, before deciding that it was great.

"Er, look, we've got to judge this. I thought you were a little bit intimidated at the beginning," said Cowell, with odd accuracy.

More importantly, Krajcik's grandma and uncle - whooping it up at his old high school in Wooster, Ohio - absolutely loved it.

Smart minds would, by this stage, have worked out that each contestant would be singing with a famous person. Who might accompany Chris Rene? Jay-Z, perhaps? Or someone even more famous like Astro?

Not quite. For here was Rene and his natural singing partner--Avril Lavigne. At least this song could stand humming.

Rene was reunited with his trilby. He was, however, a stranger to the notes of the song, Lavigne's "Complicated." Rene was so completely outsung that the only character he offered came from his grunts. Which, by this stage of the competition, have become mere cliche. It was as if Lavigne had asked a fan up from the audience to sing a few bars with her.

"It was a little shaky in the takeoff," said Nicole Scherzinger. And if Scherzinger is criticizing you, you must have truly been not terribly good.

Simon Cowell offered: "What I felt was your total joy and confidence." He imagined that this performance "could be a record." Reid agreed with him. These two don't really hear singing. They hear money. They hear AutoTune.

More importantly, Rene's next-door neighbor - standing in the nightclub where he used to sing - screamed out just how much she loved him. His friends from rehab thought he was amazing too.

Who could possibly have been paired with Melanie Amaro? Yes, a suitably family-friendly performer: R. Kelly. For the song was his "I Believe I Can Fly." Amaro, unlike the other two, betrayed neither nerves nor notes.

When R. Kelly himself entered, it was a saintly experience. The compulsory gospel choir was not far behind, but just far behind enough.

Amaro was by far the most seamless of the three contestants. She will never do anything daring - like dating R. Kelly, for example - but surely she had won the first round.

"That is one of the most important songs written in the last 50 years," offered Reid. To add to his absurdity, he suggested that Kelly had overshadowed her.

Cowell, this being his mentee, said she didn't look like someone in a talent competition.

More importantly, Bishop Fernandez - back at Amaro's church in Sunrise - thought she was amazing, wonderful, killed it. I paraphrase - I think.

There was then an interlude in which the three contestants had to sing along with many, many effigies from a new Michael Jackson Cirque Du Soleil show. They didn't seem to have their hearts in it. The song was "They Don't Really Care About Us," surely a piece that all artists dedicate every night to their agents, record companies, managers, lawyers and lovers.

This was the ultimate rehearsal for stardom.

We were back to Krajcik, who decided to reprise his audition piece: Etta James' "At Last." This was odd. People had heard this before. Why not produce something new? Why not move the audience to new raptures?

His concession to novelty was to appear with a guitar. He still gave us the manic eyes. But it simply wasn't as good, as raw, as needy as that first audition. If anything, this was a mellow version, just at a time when he needed to be anything but mellow. Worse, he was far removed from the audience, perched on a faintly silly pedestal borrowed from a school production of "Jesus Christ Superstar."

"What I liked about it was that it was all about you," said Cowell, mumbling that the competition was close.

You might be wondering, though, what the Mayor of Wooster, Ohio thought. Well, he said he was proud and excited and had declared it Josh Krajcik Day. The statue can't be far behind, can it?

Rene also decided to sing his audition song, an original composition called "Young Homie." He added a few even more original words about his sobriety. Dancers filled the stage. Six backing singers arrived to help him through. Rene just isn't a very strong singer. But the performance was uplifting, in a superficial way.

Only Cowell didn't get up and dance. Scherzinger gushed. Paula Abdul raved.

"That was your $5 million song," said Cowell, who continued to be unduly charming.

"I hope everybody got it and will vote for you," said Reid.

But what did Rene's friends Mark and Bruce back in Santa Cruz think? "Fantastic," said one of them. "An inspiration," said the other. The Mayor of Santa Cruz loved it too.

Not wishing to do something too outlandish, Amaro sang her audition song - Beyonce's "Listen." How big a choir would be the producers give her? None, as it turned out.

Her actual singing was impeccable. Her voice has power, range and joy. But that's just her voice. This competition isn't really a singing competition. It masquerades as one. But, as Reid had pointed out just a week ago, stardom is all about lovability.

"You empowered me and that's what music is all about," gushed Scherzinger, as others wondered what she had siddenyl been empowered to do.

Cowell expressed his pride and then waffled on yet again about why he brought this show to America, omitting to mention money. He proclaimed that Amaro should be the winner because the whole world would warm to her.

But, more celestially, what did they think back at Amaro's church in Sunrise, Fla.?

"Wow, unbelievable," said the Mayor. "We believe you can fly," he added, in an entirely unrehearsed moment. He's a highly electable gentleman.

At the end of the night, one would be entirely surprised if anyone but Amaro won. Especially as one would imagine that Cowell would do everything to ensure that his mentee would prevail.

The true disappointment was Krajcik, perhaps the most original and talented of them all, but produced here in such a way as to make him seem both distant and uncommercially low key.

Talking of production, let's hear it for everyone involved on "The X Factor." 18 minute of singing, 90 minutes of show. Now that's star quality.