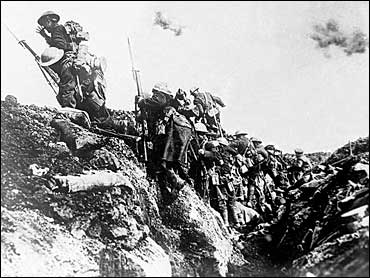 
It was described as the Great War before it even began. And indeed it was: The 20th century had never before seen a battle of this nature, or on this scale. World War I was, as it came to be known so dramatically, "the war to end all wars."

While it didn't quite fulfill that prediction, 90 years after the war began in August 1914, the unwieldy causes of World War I are still the subject of lusty discussion in history classrooms. The conflict also spawned a vast amount of literature, more than any other conflict, by an entire generation of educated servicemen — Ernest Hemingway, E. E. Cummings, Siegfried Sassoon — trying to make sense of what was quite senseless.

Historian David Kennedy says, "Other wars (like the Gulf, Korean, and Iraq wars) are in some sense limited. But WWI was an unlimited war, in the sense that it involved most major nations and was fought on terms that implied the destruction not only of the enemy's fighting capacity, but of his very polity."

What started out as a niggling conflict between Austria-Hungary and the Serbs bewilderingly spiraled out of control. The spark of that quarrel was Austrian Archduke Franz Ferdinand's assassination on June 28, 1914, in Sarajevo, at the hand of a Serbian nationalist. The opponents turned for help to their respective allies, who turned to theirs.

Soon, the nations of the world, bound by predetermined treaties and alliances, were inexorably pulled into the feud, and within weeks, every major nation had thrown down the gauntlet. By August 4, 1914, Germany invaded Belgium, Britain declared war on Germany, and so it began.

Click here for a timeline of World War I.
The four-year conflict that followed was different from all others in sheer volume of both those that fought and the death toll.

"The major countries that entered into it had mass armies. They had a system of getting every young man to be trained to fight in the army," says Charles Maier, professor of history at Harvard University.

Chemical weapons were used for the first time and new technology wrought more deaths by artillery than any war previous to World War I. Railroads enabled armies to get to the front more quickly than before, and the total number of troops mobilized was 65 million.

The death toll was as astounding. The French lost a million and a half soldiers, Germany almost 2 million, and Russia an estimated 20 million. The number of Americans dead in WWI was 110,000. (To put it in perspective, approximately 58,000 Americans died in Vietnam.) Total deaths may have topped 10 million.

"It was like playing poker," says Maier. "You can't stop putting money on the table, and the more money you put, the more reluctant you are to fold."

Televising war, as we do today, has changed its nature, Maier says. "In WWI, the front and the city were two totally different worlds ... the wars have become much more selective in who they take."

For all that has changed since the Great War, some historians see themes that are repeated in current conflicts.

Says Kennedy, "One recalls (Prussian military theorist Carl von) Clausewitz's famous dictum that war may have its own grammar, but it has no logic. Violence once unleashed can run into unimaginable extremes, beyond anyone's power to control."

On Wednesday, according to The Associated Press the 90th anniversary of the day Britain declared war on Germany, London is commemorating the event at the Cenotaph, the war memorial originally built for the first anniversary of the 1918 armistice.

Four WWI veterans brought wreaths of red poppies to the memorial, honoring those who died. The youngest veteran was 103, the oldest 108. One walked slowly with a cane, the other three held the wreaths on their laps as military officers pushed their wheelchairs up to the Cenotaph.

While no such plans are on at the Liberty Memorial in Kansas City, Missouri, the country's official WWI memorial, the focus is on centennial commemorations.

Stephen Berkheiser, executive director of the memorial, says he's hoping a presidential commission will focus on making the 100th anniversary an event to look forward to. Already, plans are underway for construction of an expanded museum, which, Berkheiser says, will have the greatest holdings of WWI artifacts.

Unlike those who served in World War II, who make up the second-largest number of living vets (next to Vietnam), there's only a handful of WWI veterans still alive. They are no longer reported in a separate category in U.S. census reports, and in 2002, their number was estimated at less than 500.

Berkheiser estimates that number to be now closer to 100.
By Raksha Shetty