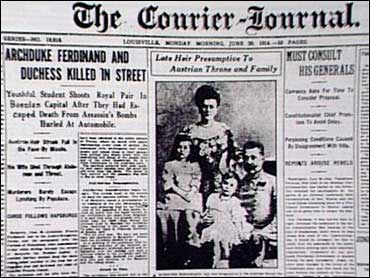 World War I spanned four years and involved all the major nation states of the world. Here's a brief timeline of the sequence of events during the war:

August 14: Battle of the Frontiers begins, settles down into stubborn trench warfare

February: Germans attack Verdun, defended by France at great cost to both sides: over 700,000 dead, wounded or missing. It was the war's longest battle, lasting till December.

May: Battle of Jutland, the biggest naval battle in history, ultimately without a clear victor. Proved to be tactical victory for Germany, but strategic victory for the British.

June: Russian Brusilov offensive in Carpathia nearly knocks Austria-Hungary out of the war.

June: First U.S. troops arrive in France. Greece enters the war on the side of the Allies.

November: Trieste falls to the Allies; Austria-Hungary concludes an armistice, as does Germany, Kaiser Wilhelm II abdicates and flees to Holland, German republic is founded.

1919 — Peace
Paris Peace Conference leads to the signing of the Treaty of Versailles. The perceived injustice of the terms of the peace treaty imposed upon Germany by the victorious Allies led, historians argue, to the rise of Hitler and WWII.