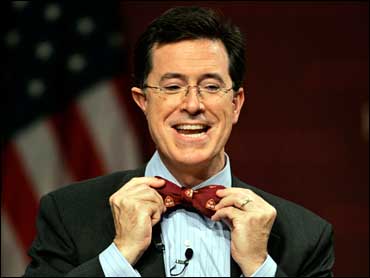 My annual "Award of the Year" goes to Merriam-Webster, the dictionary guys, for giving their "Word of the Year Award" to the word "truthiness."

Truthiness (no need for quotation marks anymore; it's a word now) is perfect for the times in every way. It is a fake word invented by a fake person, Stephen Colbert, the comedian whose character, Stephen Colbert, parodies cable news talk shows on his own cable show, "The Colbert Report." (Someone call in the Deconstructionist SWAT team, ASAP!)

Webster's has now sanctioned truthiness with two definitions: "truth that comes from the gut, not books" and "the quality of preferring concepts or facts one wishes to be true, rather than concepts of facts known to be true." At the end of his truthiness skit, Colbert says, "I know some of you may not trust your gut, yet. But, with my help, you will. The truthiness is, anyone can read the news to you. I promise to feel the news 'at' you."

Colbert actually performed this routine on his very first show in October 2005, proof, if any is needed, that this guy is a zeitgeist vessel in a big way. He has earned deconstruction.

Truthiness is the definitive cultural and comedic acknowledgement of moral relativism. How's that?

Truthiness actually has a long philosophic pedigree. It is called "emotivism," a term resurrected by a Scottish philosopher who lives and works in America, Alasdair MacIntyre. In 1981 he published one of the most influential works of moral philosophy in the later part of the 20th century, "After Virtue." MacIntyre defines it this way: "Emotivism is the doctrine that all evaluative judgments and, more specifically, all moral judgments are nothing but expressions of preference, expressions of attitude or feeling. …" In this view there is no difference between saying "the death penalty is wrong" and "I don't like the death penalty."

Where emotivism prevails, MacIntyre argues, moral arguments become "interminable." There are no agreed-on, common criteria for evaluating moral truth or judgment. "I like the death penalty, you don't." The abortion debate is a classic example. MacIntyre's entire intellectual mission is to rescue this descent into social and moral incoherence not by arguing that there is such a thing as immutable, absolute and discoverable truth, but that within a community, within a cultural and ethical heritage, there are clear and absolute virtues.

But in the real world, we live in a wild pluralism. People don't — and probably can't — acknowledge their own emotivism; they think their judgments are fact-based and reasoned, not emotional. Or they don't care. You have been the victim of emotivism is you have been shut up with the omnipresent locution, "You just don't get it!"

So the concept of truthiness also has a sociological side. We're so jaded by the continuous supply of intentional lies and deceptions by politicians, celebrities, "the media" and marketers that we need a word to replace truth, which is obsolete and naive. Emotivism won't do the trick in daily life.

Truth today is just what you feel. For deep and serious truth-tellers, truth is what they feel strongly. Like when Donald Rumsfeld kept saying that America was winning the war in Iraq: he must have felt that truth very strongly because, as we now know, he didn't think we were winning the war. John Kerry felt very strongly that it was absolutely true that he always opposed the war even though he knows he voted for the war. Some are certain of the truth that global warming is a myth because they feel it so, so strongly. Other people feel very intensely the truth that secret Republican interests control the companies that make voting machines.

This stuff can make people a little skeptical when it comes to public life. Trust in most all public institutions, social scientists tell us, has declined steadily. For example, a fall 2006 CBS News-New York Times poll showed trust in government was at its lowest recorded level. Wonder why? The congressman who chairs the House committee devoted to missing and abused children is caught sending dirty e-mails to teenage male pages; he promptly confesses that he is a "homosexual man," says he was abused by a priest as a boy and disappears in rehab. The Homeland Security Agency says we're safer because you can't carry a full tube of Crest onto an airplane. The president, in speech after speech, declares that America must "stay the course" in the Iraq war — but then announces in a press conference a few weeks before the midterm elections that "stay the course" was never his administration's policy.

The Internet is a fabulous enabler of truthiness. If you wish to believe that the war in Iraq is righteous, there are myriad blogs and sites that will deliver news and information from that angle. And there is a parallel universe of information slanted from the other direction. That's truthiness in news.

In today's civic climate, you can pick the facts and concepts you wish to be true. That is what the professionals in politics and advertising do. Indeed, in a perversion of classic American ideals, personally picking what truth to believe in is assumed to be a basic right, the very thing individuals ought to do if they are making their own authentic choices. It's your right. Virtues are for the Greeks. Objective truth is medieval. Even pure relativism may be out of fashion because it doesn't acknowledge fake truth. Truthiness is the word of the year.

In this regard, it makes good sense that one of the best-selling non-fiction books of the year is an abstract, quite difficult to read philosophic essay called "On Truth." It is by the author of "On Bullshit," which was the surprise best-seller of 2005. Ironically, our BS detectors are never off anymore. Every one is a media critic on the prowl for bias and blarney. School children are now systematically taught how to detect sexism, exploitation and manipulation in advertising. Every voter can deconstruct political spin with the skill of campaign consultant.

Still, it appears to be harder and harder to call out untruthiness. The best social critics of 2006 were make-believe. Not just Stephen Colbert, the fake right-winger, but also Jon Stewart, the fake news anchor, and Borat, the fake reporter from Kazakhstan. Somehow in a world of truthiness, where we select the truths we like, it has become too easy to dismiss "straight" commentary and criticism. If it's not fake, we don't believe it.

I'll stop even though this piece already, by definition, is interminable.

Dick Meyer is the editorial director of CBSNews.com, based in Washington.