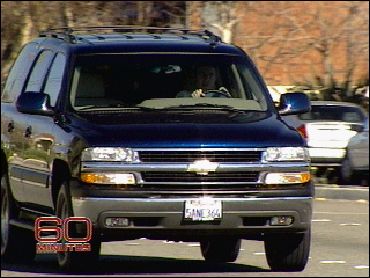 If you drive an SUV, a sport utility vehicle, you may be feeling a little defensive these days.

According to some, you're not only unpatriotic and un-Christian, you're ruining the environment. You're also selfish and stupid and dangerous - a rollover waiting to happen.

As 60 Minutes reported a few months ago, there's no end in sight to America's love affair with size and horsepower. Correspondent Morley Safer reports.

Ah, the thrill of the open road - if you can find one. Roads are more and more congested and the vehicles they carry grow ever larger. Today, the family car is no longer a modest station wagon, but a Suburban, a Yukon, or an Excursion or a Land Rover or an Escalade.

By and large, SUV owners seem a contented lot, lording it over the common herd, proud of the status symbols they captain to the shopping mall or the grocery store.

Urban and suburban guerilla groups, like an outfit called "Earth On Empty," are waging a losing battle, ticketing SUVs and citing drivers for their selfishness.

In California, a group called "Changing the Climate" uses bumper stickers to make its voice heard. And then there are the TV ads.

On the radio you can get another earful from the hosts of NPR's "Car Talk" - Tom and Ray Magliozzi. On their Web site, the Car Talk brothers feature nine downsides to driving an SUV, including "Other people on the road may hate you." SUV owners are not amused.

"They hate us," says Tom Magliozzi. "All the vitriolic responses that we get."

SUV's are the fastest growing segment of the car market. There are almost 70 different macho models to choose from and they are the mother lode of profitability. George Peterson does market research for all the major manufacturers.

And that's music to manufacturers' ears. There's the $90,000 Mercedes and a brand new Porsche is on the market. What is this need that Americans seem to have to be seen to be ready to conquer Everest or the Sahara?

Dr. Clotaire Rapaille, a psychologist, makes a living explaining that need to major corporations like the Detroit "Big Three" and European auto-makers.

"The notion of need is very, very interesting. Because what do we really need, you see? I need food, I need water. I need shelter," says Rapaille. "And you know that, but then there are other needs, needs of identity. Needs of communication. Needs of being loved, being respected."

And the need for cars.

"Absolutely. Cars are very key," adds Rapaille. "They are an expression of myself. You know, this is maybe the best way for Americans to express themselves."

That's why ads show SUVs bouncing up mountains and fording streams, even though the automakers know only about five percent of owners ever go off-road. The reality is that the two-ton, four-wheel-drive behemoth carries more carrots than climbing gear, and it's just the ticket for lugging that ton of household bills.

Rapaille no longer sees patients. He doesn't need to, because he's paid well to supply his insights to corporate America - and lives in baronial splendor outside of New York City.

Apart from Ford, GM and Chrysler, he's advised companies like Kelloggs, Kraft, and Proctor & Gamble. They pay him to get inside the deepest recesses of our brains. In fact, he's known as the "car shrink" in Detroit.

If Rapaille were an SUV, he'd be a Freud Explorer. He says people are completely unaware of the subconscious, reptilian reasons why they're drawn to SUVs.

"I don't believe what people say. They have a good alibi. They have a way to explain things to make them feel comfortable about what they're to do anyways," says Rapaille, who believes it's now considered hip to appear ready to take on anything.

"We are at war. You don't go to war in a Pinto or in a little Volkswagen. You want a tank, you want, you know, and I told the people there in Detroit, you know, SUVs - you put a machine gun on the top, you're going to sell them better, you know"

With or without a machine gun, people do say they feel more secure in an SUV – that it sits higher up, and people can see a lot more.

"Don't you think this is a fantastic alibi," asks Rapaille.

"Why? Taller. Stronger. I mean, the elephant, the bigger you are, the more chance you have to survive. Now, we know that the higher you are, more chance you have to roll over. And we know that SUVs have a higher rate of accident for rollover than other cars. I mean a Porsche is a lot less chance to roll over than an SUV. That's at the cortex, which means people know it but they don't refer to it because there's something stronger which is the reptilian- the bigger, the tallest, and more chance to survive."

Hummer means lobster in German, but in cash, it means $50,000 to more than $100,000 a copy. It's a favorite of such survivalists as Hollywood actors and New York stockbrokers.

Hummer commercials pitch the fantasy, and dealerships across the country can't keep them in stock. You can now spot them everywhere, going down city streets, the owners scanning the horizon for a wall to conquer.

"This is America. Bigger is always better. So Hummer is big," says Rapaille. "One key element here is that outside, this is Mad Max. That's the code, you know."

"Survival is key, you don't know what is going to happen. You know, is he going to attack you? You don't know if this next guy is going to be drunk and bump into you. And so you want to be square, you want to have a message. Don't mess with me because I can crush you, I can kill you right away, so don't approach me, hah? That's strong. So menacing. The Hummer is menacing."

And George Peterson agrees that menace is a great selling point.

"One woman said, "I bought my SUV so I can take it down into midtown, and there's not gonna be a taxi on the road that's gonna push me around.'"