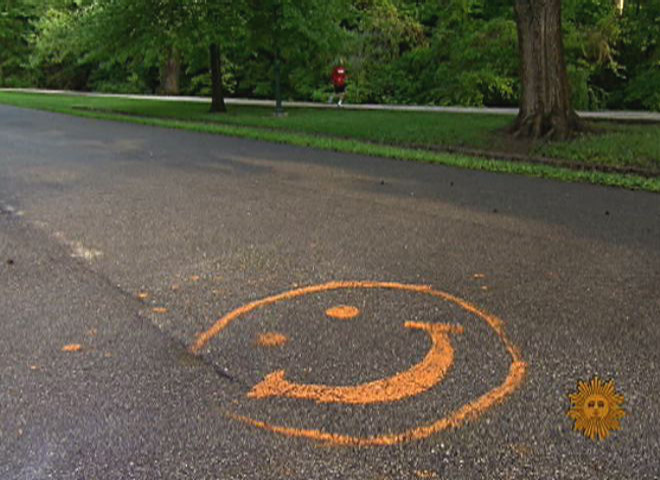 "In The Long Run" is a new book by our own Jim Axelrod. It speaks in his own way to THE PURSUIT OF HAPPINESS that beckons us all. That pursuit has taken Jim out across the country to two very different communities-- for our Sunday Morning Cover Story:

Just look at him ... five minutes from his office, fly fishing on a gorgeous spring morning before heading to work. What's not to like about Dave Query's life?

He says where he lives is a huge component of his happiness. "I lived in San Francisco, lived in Miami, New York City, Chicago, and I just think that this community, for me and what I wanted to do, it just fit."

"This community" is Boulder, Colorado, where Dave - who owns a restaurant called (what else?) Happy - is far from the only one mainlining the vibe of well-being.

"There's an energy here you just don't feel in other places," said one resident, Sean.

"Up there the spring beauties are blooming and the bluebells are out and the sand lilies are starting to come out," she remarked. And she's only five minutes from downtown.

If happiness is a state of mind, then Boulder is its capital.

But don't just take their word for it. Take Dan Witters' word. He runs the Gallup-Healthways Well-Being Index, a projected 25-year study - the most in-depth ever - of Americans' overall satisfaction with life.

"We talk to 1,000 American adults every single night, every night of the year, so by the end of the year, you've captured 350,000 respondents," Witters said.

Gallup has interviewed more than a million Americans since 2008, enough to map our happiness.

No surprise: On a statewide level, Hawaii heads the top ten. But this isn't just about good weather. Wyoming, North Dakota, Alaska and Colorado are next, and no Southern state made the list.

Overall, Americans are pretty happy. In a new CBS News poll out today, 91% of us say we're either very happy or fairly happy.

That leaves just 9% who say they're not too happy.

But the Gallup research digs deeper, beyond vague feelings of "happiness," to gather more measurable data on 55 aspects of overall well-being - everything from emotional and physical health, to how satisfied we are with work.

After all the data was analyzed, Gallup ranked the populations of 188 metropolitan areas from highest well-being to lowest. Boulder was number one.

But where there's a top, there has to be a bottom.

According to Witters, the city at the bottom of the Well-Being Index is Huntington, W.Va., which has the unhappy distinction of being dead last in 2010.

Huntington is a former coal-mining boom-town, with high unemployment, an aging population, and more than anything, poor health.

"There's no denying that a lot of the health problems that we see in this community are due to lifestyle - choices, whether they smoke or drink, or eat foods that are high in sugar and fat, whether they exercise," said Doug Sheils, director of public relations at the Cabell-Huntington Hospital.

To be fair - Sheils says it's not the city of Huntington, but the large pockets of poverty in the surrounding areas that drag the well-being numbers down.

But he knows the region has issues.

"One thing we know for certain: These statistics aren't going to change by doing nothing," Sheils said. "And so we're doing everything that we can in our community to act and to change these statistics."

To put it simply: Huntington needs a happiness project.

Which is just the job for Gretchen Rubin. This New Yorker is a former Supreme Court clerk, who six years ago had an epiphany - and turned her first rate intellect loose on happiness.

"People don't think about happiness enough," she said. "I was on a bus in the pouring rain and I didn't have anything to distract myself. And I just looked out the window and I thought, 'What do I want from life anyway?' I thought, 'Well, I want to be happy.'

"But I realized I didn't spend any time thinking about whether I was happy or how I could be happier."

And so the Happiness Project was born.

She picked 12 areas of life, from marriage to money to mindfulness, and concentrated on one a month for a year.

She ended up happier ... and with some prescriptions for the rest of us.

"Happiness can seem very complicated and transcendent," Rubin said. "So a good place to start is with your own body. So even things like getting enough sleep and getting a little bit of exercise are things that are going to boost your mood, give you a better sense of focus, give you more energy. And then it's easier to do all the other things that will make you happier."

What Gretchen re-discovered is the wisdom of that old saying: Happiness is a journey, not a destination, and one best guided by daily ... incremental changes in lifestyle... with one above all:

"Ancient philosophers and contemporary researchers agree that maybe the key the happiness, if you had to pick just one thing, is strong relationships with other people," she said. "So take the trip to see your sister's new baby, go to the reunion, throw a party. Connections - anything that's going to make you feel more connected with other people is going to add to your happiness."

Back in West Virginia, Andie Leffingwell is working on connecting with the community at Huntington's Kitchen, an outreach center where she promotes healthy eating.

"We're not going to change everyone overnight, so we're just trying to work on having fun and teaching cooking, getting families in this kitchen together, so we're just making it an initiative here in town to eat healthier," Leffingwell said.

It's the same recipe that's made Dave Query so happy in Boulder ... connection.

Which seems to be what all those Gallup numbers add up to: No matter where you live, rather than winning the lottery or rewiring your soul, being happier is really just a matter of taking that first small step in the right direction.

"Sometimes the difference between who we are today and who we want to be, or wish that we were, are very small things," Witters said. "They aren't big steps, they're little steps. What you need to do is have the knowledge that if you take that step, there's going to be something better on the other side, waiting for you. And that's at the core of the well-being equation."

Inside the Black Panther Party