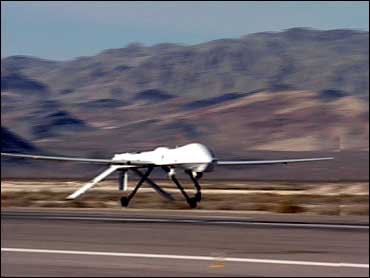 The war against terrorism is a war like no other the United States has ever fought. It has produced a weapon like no other this country has ever used: the Predator, an unmanned reconnaissance drone. As modern weapons go, it is cheap and not very high-tech. But if it comes to a final battle with Saddam Hussein it could well be the most valuable weapon in the American arsenal. David Martin reports.

The Predator has already fired more than 50 times in Afghanistan and has killed at least two high-ranking members of al Qaeda. When it's not firing its own weapons, the Predator is orchestrating bombing runs by other aircraft.

Last year, a Predator directed an attack on a site it was watching in Afghanistan. Al-Qaida fighters were gathered in a compound that included a mosque.

The Predator sent pictures, live, to an AC-130 gunship and talks it onto the target. This helped the gunship avoid hitting a mosque during the raid. The raid was able to hit three vehicles with al Qaeda fighters in them.

The commanders of the war in Afghanistan are hundreds, even thousands of miles away, but they have a live bird's-eye view as the Predator and AC-130 hunt down the al Qaeda fighters one by one. The Americans showed no mercy.

The original idea was to fly the Predator, on reconnaissance missions deep into enemy territory, sending back live video while its three-person crew operated from the safety of a trailer parked hundreds of miles away. But over the last two years this spindly little airplane has become the CIA's weapon of choice.

Missiles under the wing has transformed it into a real Predator, a top-secret killer the Air Force handed over to the CIA to hunt down human prey, like the five al Qaeda operatives who were killed by a Predator strike in Yemen late last year.

A Predator can see a man on the ground at 12 miles, and it can keep watching him for hours, transmitting live video to a ground station that can be set up anywhere – including the Pentagon or at the CIA.

That Predator attack in Yemen was not the first time it has fired on terrorists, just the first time a news camera captured the aftermath. Air Force Chief of Staff General John Jumper is the man who made it happen.

"No. I turned it into an armed reconnaissance vehicle," Jumper said. "We don't do 'hits' in the United States military."

"What would you call Yemen?" Martin asked.
"I would call Yemen a shot against a target," he said.

Thirty feet long and powered by a 106-horsepower snowmobile engine, the Predator looks more like a model airplane than a 21st century weapon.

"It was a weird little critter. It had a lot of wonderful qualities to it, but it was very persnickety. It didn't fly in, in the weather very well. It iced up easily, and just weird problems that we had to overcome," Jumper says.

One wonderful quality: when a Predator is shot down, as this one was by the Serbs, there's no pilot lost or captured. One big problem: the Predator could see a lot, but do very little. Four years ago, when it had its baptism by fire in the war against Serbia, the Predator could count the number of Migs on a runway and follow a marauding tank cut a swath through a village in Kosovo. But that was all it could do – watch.

"You'd have the Predator up there looking at targets, but you had no way to get that information, other than verbally, to the airplanes that were going to attack those tanks," says Jumper.

So the Air Force put a laser-targeting device on the Predator. The ball, as it is called, shines a laser beam on the target so jet fighters can drop laser-guided bombs that home in on it.

"This is a breakthrough," Jumper says. "It turns the Predator from just a pure surveillance system into something that actually, now, directs weapons on the targets."

It was the beginning of a revolution in the Air Force, Jumper thought, but in an institution devoted to state of the art supersonic war planes armed with bigger, better bombs, the Predator had about as much appeal as a gnat.

"Well, it actually took a step backwards… coming out of Kosovo," Jumper says. "I go from the commander in Europe, come back to command the combat forces in the United States and the first question I ask when I arrive at my new command is I ask, 'Well, how are we doing on the laser ball that we put on the Predator over in Kosovo?' And the answer I got is, 'We took it off.'"

Jumper told them to put it back and to see if they could get it to fire a missile.

That was military heresy because the Hellfire is an Army missile fired by Apache helicopters, and Jumper was ordering it put on an Air Force plane. But that beat watching helplessly as the enemy got away.

"Here we had these fleeting targets that a small warhead could have dealt with," Jumper says. "Why don't you just have something on the Predator that, for the fleeting perishable targets that don't require a big warhead that we can just go ahead and take care of? It was, it was obvious."

Was there a lot of opposition?

"It wasn't so much opposition as fear. When I said "Put the Hellfire on the Predator," the first briefing I got was very smart, well-meaning people, come back and say, 'You know, sir, this is gonna take a number of years and it's gonna take tens of millions of dollars and, and everything is high risk.' And I looked at them and I said, 'You know, this is the United States of America. You take three months and $3 million, and you go do it, just do it.'

With a wingspan of less than 50 feet, the Predator was never designed to carry a weapon. Before the first test shot the engineers were afraid the missile's exhaust would actually melt the wing. It was done in secret in the Nevada desert, but by June of 2001 the Predator was armed and, according to some officials, turned over to the CIA for a special mission.

Some say the reason the Hellfire was put on the Predator was to kill Osama bin Laden.

"No," Jumper says. "The Hellfire was put on the Predator to take care of a range of targets that we called fleeting and perishable. Ones that get away quickly. That was the original intent."

Judging by the silhouettes painted on the nose of this Predator operating over Afghanistan it was racking up kills right and left. Those pictures of bin Laden presumably stand for members of al-Qaida. But the warhead on the Hellfire missile was designed to penetrate the thick armor of a tank before detonating and it wasn't working well against softer targets.

Jumper says it would go through the target and blow up the dirt underneath. Two months after the war in Afghanistan began, the Air Force called Chuck Vessels at the Army's Redstone Arsenal in Huntsville, Alabama, one of a handful of American engineers who designs and builds warheads. His nickhame is "Boom Boom."

Vessels was faced with a tough problem: The Hellfire needed a new warhead, fast, so he didn't have time to open up the missile and start from scratch. He created an exterior sleeve that would send out shards of the missile when it hit its targets.

Until now the chief targets of the Predator have been people – members of the Taliban and al-Qaida. But if the U.S. goes to war with Iraq again it will have a new target: SCUD mobile missile launcher, the weapon Saddam Hussein used against Israel and Saudi Arabia in the last Gulf War.

These SCUDS belong to the U.S. and are used by the Air Force to train for what could be the highest stakes mission of another war with Iraq – hunt down and kill those missiles before Saddam can launch one. In the last war, Iraq fired 88 SCUDS. One hit a U.S. barracks in Saudi Arabia killing 28 American soldiers. Thirty nine landed in Israel and threatened to bring Israel into the war, a step that would have destroyed the Arab coalition against Saddam.

"There was intense interest, particularly in Washington, to try to stop those launches and deal with them as rapidly as they could and that became known as the Great Scud Hunt," says former Pentagon official Barry Watts, part of a team which examined the efforts to find and kill Saddam's SCUDs.

He says there were no confirmed kills. The Air Force flew 2500 missions looking for SCUDs, but the Iraqis were always one step ahead.

Says Watts: "They would hide the launchers and then they would drive them out very quickly to pre-surveyed launch sites. They were able to set up very quickly, launch and then just skeedaddle in a matter of minutes."

U.S. intelligence had studied the procedures the Soviet army used to launch SCUDs and found it took 30 minutes. But the Iraqis cut that to less than 10 minutes. There was another surprise. They built excellent decoys. They even put fuel inside that that if you targeted it with a weapon it would blow up and look pretty much like the real thing.

Jumper says that if there is a war, this time the U.S. will do much better, and the Predator will help.

The Predator is already operating over Iraq, watching Saddam's air defenses. And in the U.S., Predator crews are training for the next great SCUD hunt. The stakes this time are even higher because the U.S. expects Saddam to put chemical or biological warheads on his SCUDs.

Is Jumper confident that the U.S. can stop any attempt by Saddam Hussein to launch a SCUD against Israel or some other country?

"There are many unknowns in the course of a war," he says. "So I'm not going to sit here and predict to anybody with a 100 per cent certainty that we're going to be able to prevent anything 100 per cent."