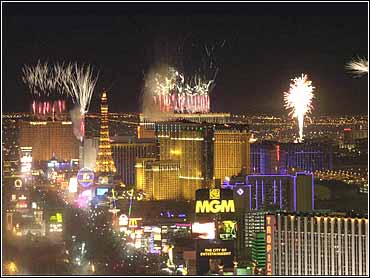 In a town known for its winners and losers, no one feels luckier than Las Vegas Mayor Oscar Goodman, reports CBS News Correspondent Jerry Bowen for CBS News Sunday Morning, whether he's handing out food at a homeless shelter, fielding calls on his weekly TV show, or rubbing shoulders with the city's rich and famous, like Phyllis McGuire, Siegfried and Roy, or Tony Curtis.

Oscar Goodman, you see, is at the center of the fastest growing metropolitan area in America, growing at the rate of 6,000 new residents every month.

"There's no income tax," he says. "I always like to tell people that it's a great place to live, and we have no estate taxes. A great place to die. So, we got the best of everything."

It's a very different place than the Las Vegas that greeted Oscar Goodman in 1964.

"When I got here," he recalls, "we had 70,000 people, and the community was really a one-horse town. And now we have 1.4 million in our valley here, and it's thriving and growing, and I'm a great believer in growth. I don't want to ever see us stop growing, because once you stop growing, you stagnate."

Ken and Wendy Ostempowski and their three children just moved from Buffalo.

​Jon Cryer tells all, and then some

"The perception of Las Vegas is that it's an adult paradise, Disneyland for adults," says Ostempowski, who is the new finance director at the Lady Luck Casino. "We really found that the perception was not the reality. We found that people we met loved the family environment."

He says that as soon as you get away from the strip and the downtown casinos, there is plenty of family life. And he finds the Las Vegas image "intriguing."

Don and Andrea Berman came from California a few months ago. Their new home is in one of the growing number of retirement communities changing the desert landscape.

Don: "It's exciting, really. And we're not gamblers."

Andrea: "What I like about living up here, you're very close to everything. It's a 24-hour town, and yet you're very isolated at the same time."

And, while it might be known as "Sin City," Rothman says, "Once upon a time, what we did in Las Vegas was considered a sin, and we were a scapegoat. We were a place Americans went to release their seam. And what's happened is, is that in our society, the things that are sinful have changed dramatically and are far more risque than we are. And, you know, in a world where rollercoasters are exciting, Las Vegas was risque. In a world where Jerry Springer is on television, we're pretty normal."

And getting more popular. On average, a new house is built here every 15 minutes; a new school, every month. So there is what some people call an incredible sprawl from one mountain ridge to another. Is that a bad thing?

"Sprawl is in the eye of the beholder," says Rothman. "And, you know, it's certainly a bad thing if you're like me, and you had a wonderful house on the edge of town, and the town caught up with you, and you moved, and it caught up with you again... As near as you can tell, there's nowhere that's the edge of town any more. In that respect, sprawl is a bad things. Sprawl is also a function of a healthy economy...of a place where people want to come."

The Sierra Club's Peggy Pierce says the urban sprawl is affecting the quality of life for Las Vegans. She says, "Every kind of problem that's brought by sprawl, we have. We have air pollution problems, we have traffic problems... Because it's the desert, we need to do better conserving water... The Environmental Protection Agency sets standards for clean air. And we are not within those standards. Our air is too dirty."

Part of the problem is increased auto emissions. A larger contributor is the desert dust kicked up into clouds by earth-moving equipment carving up more of the landscape for homes, roads, and golf courses.

And what is Mayor Goodman's reaction to the sprawl? Bring it on, he says, but don't forget the past, the original Las Vegas that started it all, the playground that was carved out of the desert by colorful (and sometimes notorious) characters.

And Oscar Goodman should know. He played a supporting role.

"My former life representing the, quote, mobsters, end quote. If you make a mistake, you never see 'em again," he says. "They either go to the electric chair or prison for the rest of your life."

Long before he was elected mayor in something of an upset 20 months ago, Oscar Goodman was the defense attorney for the mob. And proud of it. He even played himself in the movie Casino, which depicted mob life in the Las Vegas of old.

"There was a certain way of looking at Las Vegas in the old days which, to me, is really the allure of what has made it great. The mystique, and I'd like to preserve that and keep it going. But, right now, we're a pretty legitimate conservative community."

And that brings us to Oscar Goodman's vacant lot. Actually, it's the city's vacant lot where the mayor sees his vision coming to life. Goodman believes Las Vegas can't achieve its goal of becoming a first-rate American city without revitalizing the downtown and rethinking the future.

He wants to build "a city witin a city" a major sports complex and a cultural arts center and an "advanced academic medical institution," as well as homes and retail stores. "Just everything", he says.

"Gaming has been very good to Las Vegas," he explains. "We have a wonderful quality of life here. But there comes a time when we have to diversify the economy. I'm trying to do that. I want to get Las Vegas thought of differently than just a one-horse gaming community."

That doesn't sit well with many of the corporate casino owners, who don't welcome anything that will pull customers away from the strip.

Says Goodman, "They have to say, 'Okay, we'll let the customers leave our casino for four hours and treat them to a basketball ticket or to an art show downtown, and then they can come back, and they can lose their money.'"

A big part of Oscar Goodman's problem is that much of the meteoric growth in the Las Vegas metropolitan area (including the housing developments spreading to the horizon and the grand new casinos along the famed strip) are outside the city limits.

He talks about annexing the strip and vows to put his popularity and reputation "on the line, and I'm gonna say, 'It's in the best interest of the public to have this as one cosmopolitan metropolitan area.'"

The odds on the mayor's success are unknown. But it's almost a sure bet that the rapid growth of the Las Vegas area will continue. Says professor Hal Rothman, "Basically, development happens at the pace developers want and where developers want it to happen. The fact is growth here. We are addicted to it."

Says the Sierra Club's Peggy Pierce, "I don't know that you can stop growth here. But it needs to be much better planned than it's been. Our county commissioners give in to the developers every time they ask. As I said to someone recently, 'You know, the hookers in this town say no more often than our county commissioners.' And that needs to stop."

Mayor Oscar Goodman sees no problems from the growth; only issues to be solved and a town to be revitalized -- reinvented.

"I'm not sure we're reinventing it. I think we are inventing a new Las Vegas that will fit in very nicely with the old Las Vegas."

On a personal note, did he reinvent himself as the mayor?

"No, I'm still the obnoxious loudmouth that I was as a lawyer," he says. "I just smile a little bit more now."

And it gets things done?

So far, so good, for the determined mayor who wouldn't mind a new sign on the edge of town some day: Welcome to Las Vegas. The town Oscar Goodman rebuilt.