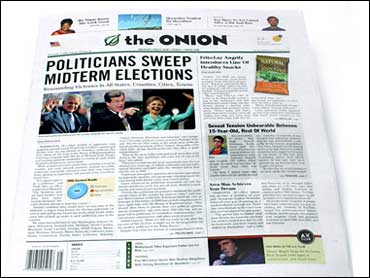 (CBS/AP) "The Onion" fans can now enjoy a new - or, depending on your point of view, old - taste of this vegetable. The national fake-news source is unleashing its digital archives on its website following a launch of the iPad application "Onion Tablet."

Beginning Monday, TheOnion.com will begin posting a handful of old issues every week for the coming months.

The Onion was founded in 1988 in Madison, Wisconsin, by two students from the University of Wisconsin. Though it began as a local college newspaper, it became a national comedy institution and went online in 1996.

It has since developed a TV news parody, the Onion News Network, that has spawned several TV shows. Its paper is still distributed weekly in cities, but it has also embraced Twitter and on Friday launched an app for the iPad and other tablets.

But the archives, which have previously been published in book collections, show the Onion's humble, black-and-white origins. The early issues show the paper finding its footing and honing its dry comedic voice, a parody of USA Today style.

Editor-in-chief Joe Randazzo, who has been at the Onion for five years, said he was struck by the paper's consistent anti-administration tone across eras, as the Onion grew from a local Midwest perspective to a more national outlook.

Though the `80s issues aren't as polished as the Onion, Randazzo noted many of the Onion's trademarks were there early on.

"A headline like `Pen Stolen from Dorm Study Area' is a classic Onion headline," said Randazzo, referring to a front-page story from 1989. Inflating a mundane event to a bold-faced, front-page headline - often using its beloved identifier "area man" - has always been an Onion staple, said Randazzo.

Eventually, the popularity of such headlines was partly what drove the Onion online. Inspired by the viral e-mailing of a popular headline - "Clinton Deploys Vowels to Bosnia: Cities of Sjbvdnzv, Grzny to be first recipients" - the Onion launched its website, thus becoming one of the early newspapers to transition to the new digital world.