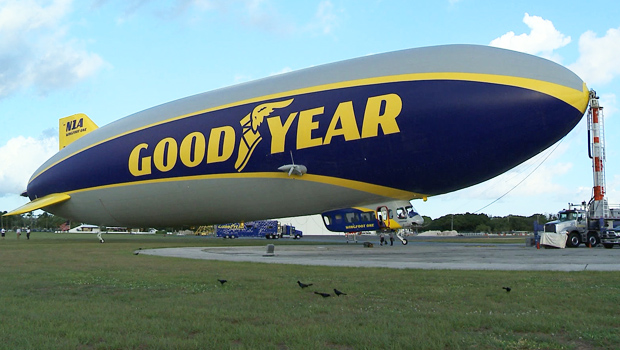 The Hindenburg disaster of 1937 put an end to the dream of passenger travel aboard dirigibles lifted by flammable hydrogen. By contrast, Goodyear blimps full of NON-flammable helium have been safely soaring UP, UP, AND AWAY for decades. Lee Cowan takes us aloft:

It took 93 years of waiting, but Alice Gratias finally checked this off her bucket list. "Oh, it's so exciting!" she said, climbing the ladder.

She climbed into her seat slung beneath more than 200,000 cubic feet of helium -- and a few moments later, Gratias was headed into the wild blue yonder in the Goodyear Blimp.

It's a rare seat indeed aboard a floating icon.

Our friend Charles Kuralt had the same pleasure nearly 40 years ago. He described the experience as only he could:


"Hovering around in a blimp works a lovely psychological change on a man. Since you know you're not going anywhere fast, you become content to go slow. Cars pass you by. Even seagulls pass you by. None of it seems to matter."

Things haven't changed much since that ride of Kuralt's. In fact, the blimps themselves aren't all that different than when they first took to the skies in 1925.

"It IS vintage," said pilot Taylor Laverty. "It's actually made out of real wood. You don't find that in aviation anymore."

Laverty is one of only three women worldwide known to fly an airship.

"I can't believe you can just stick your arm out," said Cowan.

"Yeah, yeah, it's like being in a convertible!" laughed Laverty.

It's old-school flying. Cruising speed: a lumbering 35 mph. All Taylor has to steer the blimp are cables and pulleys -- and a lot of brute strength.

"There's a lot of pressure for when you want to make an actual turn, if you want to pick it up," said Laverty of her workout.

It's all thrillingly quaint. But to some at Goodyear, the blimps were starting to become a little TOO quaint. The time had regretfully come, the company figured, to phase these faithful servants of the air out of service.

"You grow attached to it," said pilot Matt St. John. "You've done a lot of big events, and it's taken you across the country. And to one day, everyone say, 'Okay, we have to pull the plug,' it's heartbreaking."

St. John flew the last flight of the Spirit of America this summer before she was retired with dignity. "It was a tough week for us," he said.

Tougher still for Goodyear's CEO Richard Kramer, who had a big decision to make.

Cowan asked, "What do you think would have happened if you had decided it was time to end the blimp program?"

"That's something I don't want to find out," replied Kramer. "It never was going to happen. I think there would have been a revolt to not see the blimp in the skies anymore."

So instead he decided to invest millions of Goodyear's marketing money into replacing the old blimps with the NT model. It's a new generation of airship -- 50 feet longer, about 40 miles an hour faster, capable of cruising at freeway speed. Its engines can swivel in place, making it far more maneuverable than its older cousins.

Inside is a skeleton made of carbon fiber. Technically that makes these new Goodyear blimps not really blimps at all, but "semi-rigid" airships.

"About the only thing that is the same is that helium lifts the thing," said pilot Mike Dougherty. "Everything else is different."

The updated gondola has room for nearly double the number of passengers, complete with a bay window offering astonishing views.

"We call that the picture window because everybody sits back there and takes pictures," said Dougherty. "It's a beautiful view. There's nothing else like it in aviation. It's really unique."

Gone are the old manual flight controls, replaced with joysticks that operate the airship electronically.

So, is it easy to fly? "It's different to fly, yeah," said Dougherty. "It's not physically challenging, and once you get the concepts now, it's not so bad to fly."

Goodyear is building three of the new NT models at a massive hanger in Akron, Ohio. Each is being assembled piece by piece, from parts sent over from a zeppelin company in Germany.

Although we know Goodyear mainly for its tires, the company has actually been in the blimp business most of its corporate life.

Eddie Ogden, Goodyear's airship historian, took Cowan on a tour of what he called "our 'Raiders of the Lost Ark' room!" In it are the remnants of a company so trusted in early aeronautics it was put under contract to build airships for the U.S. Navy. Amelia Earhart even christened one of them.

Its most famous were the USS Akron and the USS Macon -- floating aircraft carriers that were as big as ocean liners.

Passengers soon found airships a luxurious way to cross the Atlantic. It was hailed as the future of air travel. But the Hindenburg disaster at Lakehurst, New Jersey, in 1937, brought an end to it all. Eventually, even the military had little use for airships.

But Goodyear found a new purpose for its floating billboards: Camera platforms. And the cameras back then were huge -- and heavy.

The first blimp-cast was the Rose Parade in 1955. Those aerial images redefined the way we saw major events, says Goodyear's Scott Baughman: "It was incredibly revolutionary, and the technology at the time was being developed as we needed it."

"You were kind of making it up as you went?" asked Cowan.

"We were discovering it as we went, absolutely."

Cowan spent six hours hovering above the Miami-Clemson game back in October. A Goodyear blimp will be watching over Clemson again tomorrow night, as they take on Alabama for the College Football National Championship.

For chief pilot Jerry Hissem it's as good as it gets.

Cowan asked, "Does it ever get a little tedious just going around a stadium over and over?"

"No," replied Hissem. "I could go fly for another eight hours. It's fun!"

There's just one of the old models left: The Spirit of Innovation, based near Los Angeles -- the one that brought Alice Gratias back to Earth.

Her ride wasn't just a bucket-list moment; it was also her birthday present. "What a birthday!" she exclaimed.

What a birthday -- and what a machine.

Old or new, Goodyear's floating ambassador has both secured and preserved the low-and-slow style of flying -- an intimate, friendly way to get your head up in the clouds.