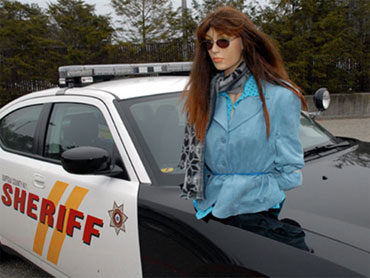 For almost half a century, Europe has depended on imported labor to do the kind of menial jobs its own people don't want to do -- so much so that, today, the population of France is almost 10 percent Muslim.

They are the descendants of Algerian, Moroccan and Tunisian workers who came from France's ex-colonies.

When people talk about ghettos in France, they're talking about high-rise complexes that have been built far away from the city center to house African and Arab immigrants.

Just saying you live in the neighborhood is enough to get your job application thrown in the garbage. And the unemployment amongst young people is four times the national average.

With little hope of making it outside the projects, many of these young men try to dominate their own neighborhoods, resorting to violence, especially against young women.

They rule gangland style, combined with the male-dominated traditions of the Arab countries they came from. It's gotten so bad that, today, most of the young women only feel safe if they are covered up, or if they stay at home. Girls who want to look just like other French girls are considered provocative, asking for trouble.

Samira Bellil wasn't asking for trouble, but trouble came to her. She's the granddaughter of Algerian immigrants and she's written a book about surviving the hell of the Paris ghettos.

"I was gang raped by three people I knew, and I couldn't say anything, because in my culture, your family is dishonored if you lose your virginity," says Bellil. "So I kept quiet, and the rapes continued. The next time, I was pulled off a commuter train and no one lifted a finger to help me. …Everybody turned their head away. They were all looking out the window."

When Bellil's family discovered that she had been raped, they weren't sympathetic. They threw her out onto the streets. But she's since discovered that what happened to her was not the only case.

"There was a trial in Lille where a 13-year-old girl was gang raped by 80 men. Sometimes, it's 80, or 50 or 10. It's absolutely terrible," says Bellil. "In the case of Argenteuil, it was horrible. A young woman was raped in a school. Of course, everybody knew, but they're so afraid of these young men that they prefer to close their eyes. That's the price of peace in the ghettos."

When the verdicts came down in this case, the courthouse turned into a madhouse. Eighteen teenagers were convicted of raping a 15-year-old girl over a two-month period. But what really shocked France was how the mothers of those boys reacted.

"You call this justice, seven years in prison for some oral sex," says one mother. "It's the girl who should be behind bars."

Aboubacar was one of those convicted, not of raping the girl, but of knowing about it, and doing nothing to stop it. "When you live in a neighborhood that's so dark and tough, you can't mess with others' business, unless you want to put your life on the line," says Aboubacar.

He received a suspended sentence, and now he's using his rap music to spread the message that violence is wrong.

"We were gangsters. If someone was robbing a house, I had to follow the group, otherwise they'd say I wasn't a man," says Aboubacar. "Men are stronger than women. Men are more respected than women. So if I don't have many brothers, my sister can be attacked. But if I come from a big family, people will lower their eyes when they pass my sister. That's part of the law."

Nadir Doudane grew up in the same projects. Now, he works as a youth counselor trying to encourage more normal relations between the boys and girls.

What is it about the projects that is at the root of this violence?

"I think it's because of the tradition that make the boys think that the girls should be treated this way and not that way," says Doudane. "It's not France here."

On downtown Paris streets, racy ads are still the rule. But in the projects, the fundamentalist voices are growing stronger. They are now targeting the disaffected youth in the ghettos. Many of the mosques there are filled with fundamentalist preaching.

This is what an influential imam of one French mosque recently said about how men can treat their wives: "If a woman cheats on her husband, her husband can beat her, as long as he doesn't hit her nose, her eyes, her ears. That's part of our religion."

The French government promptly deported this imam back to his native Algeria. Bouziane is the fifth Muslim cleric thrown out of France this year, for preaching such an intolerant form of Islam.

But this clash of cultures is threatening to divide France, between those who want to keep the country secular, and those who protested against the government's ban on wearing Islamic headscarves in public schools.

It's also dividing many immigrant families, like that of a young woman we'll call Sonia. She doesn't want to be identified, because she's cut off all contact with her family. She was born in France, but her parents are from Tunisia.

Sonia's father tried to send her to Tunisia for an arranged marriage, after he found out that her boss had raped her. In her father's eyes, Sonia had dishonored her whole family.

"My father told me it was my fault, that what happened to me," says Sonia. "I provoked him to do what he did to me. I couldn't change his mind."

And there are many others like Sonia. At least 70,000 young women have come under pressure to accept arranged marriages, according to France's Commission for Integration

Equally hypocritical, he says, is the French government, which champions equality, but has effectively disenfranchised its own Muslim community -- the biggest in Europe.

"We are 10 percent of the French population, and we have no members of parliament…We have 37,000 mayors. In France we have no mayor [of Arab descent]," says Kedadouche. "It's very strange. … We can compare the situation of black people in the beginning of the '60s in America and now in France."

Why, then, does there seem to be so much violence in the ghettos, in the slums and project areas, where most of the immigrants have to live?

But nothing prepared France for what happened to a 17-year-old French Muslim girl named Sohane Benziane. Her case really woke up the country to the nightmare that has been festering so long in these projects.

Sohane was burned alive in the basement of an apartment complex by a gang leader who had told her that he didn't want to see her on his turf. After her murder, her sister, Kahina, dedicated a memorial at the site of her killing.

And just in case there was any doubt about where loyalties lie in these projects, when the young man accused of killing Sohane returned with police to show how he had doused her with gasoline, the highrise he had controlled broke out in cries of support.

That just infuriated Samira Bellil enough to help lead a national movement against this violence. "Before, they would rape us. Now, they're burning us alive. Sohane can't speak anymore, so I'm gonna do the talking," says Bellil.

"Ni putes ni soumises," is a provocative slogan that, roughly translated, means "We're neither whores nor doormats." It's a movement that sprang out of the ghettos, made up of mostly immigrant women who are now fighting back against the gang rapes and violence that plague their neighborhoods.

Bellil is in the forefront of that fight, leading demonstrations and lobbying to set up shelters to help protect these women.

In an extraordinary gesture, the French government honored Bellil's achievements, and those of 13 other women from the projects, by hanging their portraits outside the country's parliament, recognizing that France's ethnic fabric is changing.

"My life is not the same life today," says Bellil. "Before, it was terrible, it was terrible. But I fight very hard to be what I am now today. And I win, and for me, it's wonderful, and now I smile."

The strategy behind the economic sanctions against Russia