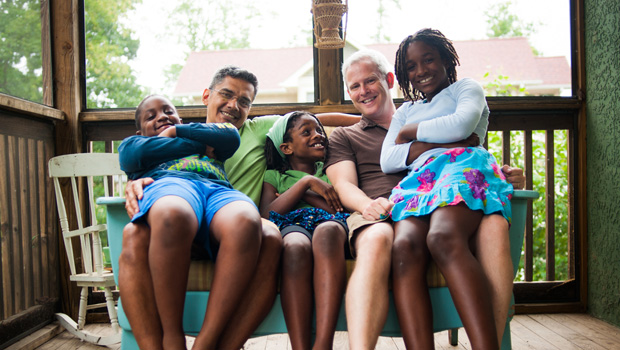 "We Are Family" was a hit song for Sister Sledge back in 1979. American pop music has changed a lot since then . . . and so has the American family. Our Mother's Day Cover Story is reported by Rita Braver:

Mothers have been feeding their families Cheerios for generations. So when General Mills ran a new ad last year, it seemed like a winning formula: A timeless cereal and a universal theme: Love.

Mark Addicks, chief marketing officer at General Mills, the maker of Cheerios, immediately signed off on the ad: "We saw this as one way to tell the Cheerios story in a very new, fresh and interesting way."

Fresh and interesting -- in part, of course, because the mother is white, the father is African-American, and the little girl . . . well, she's just adorable.

Addicks said the overwhelming response was positive, but there was also a stream of hate-filled backlash on the Internet, much of it overtly racist.

Cheerios got so many negative comments on its website that they actually took down the comments section. "We did," said Addicks, "because we thought there were some hurtful things, some things that weren't positive."

But that didn't stop General Mills from running a follow-up ad on the biggest advertising day of all: Super Bowl Sunday.

"Did you ever think of backing down, because there was a certain segment of society that was not accepting of this?" asked Braver.

In 1938 General Mills commissioned Norman Rockwell to paint scenes from American family life. But households today look less and less like those images from the last century.

"The difference between family lives in 1965, let's say, and in today is enormous," said Johns Hopkins sociology professor Andrew Cherlin, who has been writing about the American family for more than three decades. "We have just lived through a huge period of social change. And you know what? There's no reason to think it's at its end. I think it's probably still going on."

In fact, the change is unprecedented: Marriage is at an all-time low, but for those still tying the knot, more than 15 percent of new marriages are interracial or interethnic.

As for raising kids: One-parent homes are on the rise, and the number of same-sex couples with children -- though small -- is the highest ever recorded.

"In the 1950s, the message was there's only one kind of family that's okay," said Cherlin. "And that's the married family a la 'Leave It to Beaver.'"

More than a half-century later, we have "Modern Family."

"We've gone from a situation where there was only one right way to have a family -- that is, get married, get married young, stay married, and have lots of kids -- to diverse pathways," said Cherlin.

Monroe Moore and his husband, Lupe Perez, have a long history together -- they met 24 years ago. But they're hardly traditional. Their Asheville, N.C., household is a true modern family.

Moore said that within the first month of meeting, they knew they wanted to have a family together. "We both come from six," said Moore, "so family is inside of us."

Moore and Perez, who were married in Vermont last year, still remember how excited and nervous they were when they adopted their first child in 2001:

"In walks this lady with this little bundle with a shock of black hair sticking out of it," said Perez, "and all of the waiting and all of the jumping melted away. And there was Maria, our oldest."

Two more children, Beatrice and Oliver, have joined the family, too.


Even in a home where there's no conventional mother, there IS a mom who plays a big role; 92-year-old Ellinor Moore loves to visit her son Monroe's family.

And what does she think of her grandchildren? "I think they got the cream of the crop," she told Braver.

"There was a time when two men might not have been able to adopt children and raise them in a family," said Braver.

"When I was a child, there wasn't even a word for it," said Ellinor. "But it doesn't alter the fact that when two people love each other enough to spend their entire lives together, then I don't see that that makes a great deal of difference."

But, recall, even interracial couples on TV can draw a negative response.

Are there two Americas these days? "There are certainly still two camps out there," said Cherlin -- those who accept the changes and those who don't.

"I cannot expect everybody to just change on a dime, it takes time," said Monroe Moore. "It takes people stepping forward and saying, 'We are no different than anybody else. This is our family. This is what we envision our family to be.'

"And we aren't two Americas; we're one America, going through a rebirth of who we can be for the future."

But whatever the future holds, certain basics seem here to stay.

Mark Addicks, of General Mills, said, "What has stayed the same are the traditional values and desires to bring a family together, to nurture kids, to make them develop and be everything they can be. That has not changed."

And on this Mothers' Day, moms still play a central role in doing just that.

"What does it mean to be a good mother?" asked Braver.

"Oh, my goodness -- I guess just love them, no matter what," said Ellinor Moore.