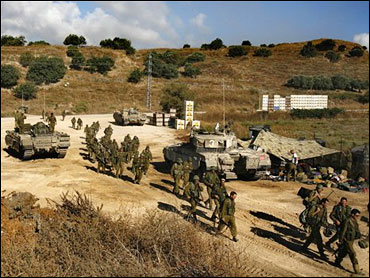 Israel says it will postpone, for two to three days, a planned expansion of its ground offensive in Lebanon - in order to give ongoing diplomatic efforts a chance. Israel had its deadliest day Wednesday, with 15 soldiers killed.

Asked by Israel Radio early Thursday about the plans for such a delay, Cabinet minister Rafi Eitan said: "There are diplomatic considerations. There is still a chance that an international force will arrive in he area. We have no interest in being in south Lebanon. We have an interest in peace on our borders."

The broadening of Israel's ground offensive into southern Lebanon, approved by Israel's Security Cabinet on Wednesday - would be a gambit aimed at bringing Hezbollah to its knees before the international community imposes a cease-fire.

The plan to force Hezbollah guerrillas — and their short-range rockets — out of southern Lebanon and past the Litani River would escalate the fierce fighting there and, if successful, leave Israel in control of a security zone that it evacuated six years ago after a bloody 18-year occupation.

A new Israeli offensive would also put tremendous pressure on the United Nations to agree quickly on a cease-fire to end the fighting that has killed at least 829 people, caused widespread destruction across southern Lebanon and forced hundreds of thousands of Israelis into bomb shelters. Israeli officials implied they would halt the new offensive if a cease-fire agreement removes Hezbollah from the border.

In a televised speech Wednesday, Hezbollah's leader taunted the Israelis.

"If you enter our land, we will throw you out by force and we will turn the land of our invaluable south into your graveyard," Sheik Hassan Nasrallah said. "We will be waiting for you at every village, at every valley. Thousands of courageous holy warriors are waiting for you."

Hezbollah also says its stockpile of rockets has not been depleted, and it warned Arab residents of the often-hit Israeli city of Haifa to leave for their own safety, Pizzey adds.

The White House said neither Israel nor Hezbollah should escalate their war. Although White House press secretary Tony Snow said the message was for both sides, the criticism was among the Bush administration's strongest concerning longtime ally Israel since the fighting began.

Other officials said privately that the offensive was aimed at pushing the Security Council to take fast action, as well as to clear Hezbollah from south Lebanon.

"The Israeli decision today is taken in absence of concrete steps by the international community to deal with the situation in Lebanon. Such steps would of course make an Israeli military operation superfluous," Foreign Ministry spokesman Mark Regev said. "Israel understands fully that the real solution is diplomatic."

A minister in Israel's Security Cabinet said the offensive might not begin for two or three days to give more time to cease-fire talks, but senior military officials said the operation could begin very quickly.

Soon after the Cabinet decision, a column of Israeli tanks and armored vehicles crossed into southern Lebanon and took up positions inside Lebanese territory, witnesses said. The Litani River is about 18 miles north of the border.

Before the new offensive got off the ground, fighting intensified in the border strip that 10,000 Israeli troops were already occupying four miles into southern Lebanon.

Israeli warplanes also dropped leaflets over the southern port city of Tyre and over Beirut proper for the first time. The fliers criticized Nasrallah, saying he was "playing with fire" and that the Lebanese people were "paying the price."

Hezbollah fired at least 170 rockets into Israel on Wednesday, the army said.

Since the fighting began, at least 711 people have died on the Lebanese side of the conflict. The Israeli death toll stood at 118, including 36 civilians and 82 soldiers.

Israel's Security Cabinet was told a new offensive could mean 100 to 200 more military deaths, according to a participant. Military officials said it would take the army several days to reach the Litani and then several more weeks to rid that area of Hezbollah's fighters and rocket launchers.

"The assessment is (the new offensive) will last 30 days," said Trade Minister Eli Yishai, a member of the Security Cabinet who abstained from the vote. "I think it will take a lot longer."

The offensive was approved 9-0, with three abstentions at an intense six hour meeting. During the meeting, Secretary of State Condoleezza Rice called Prime Minister Ehud Olmert, and they spoke for half an hour, Israeli officials said. Upon his return to the room, Olmert told the ministers the offensive would be accompanied by a diplomatic initiative.

The government's decision came two days after Lebanon offered to send 15,000 soldiers to patrol the border region, a key Israeli demand intended to prevent attacks on Israel. The current fighting began when Hezbollah fighters crossed into Israel on July 12, killing three soldiers and capturing two others.

In a major shift, Nasrallah said Hezbollah supported a deployment by the Lebanese army after a cease-fire is declared and Israel leaves.

Israeli officials remained skeptical of the Lebanese offer and were not convinced Lebanon's army would take concrete action to stop Hezbollah attacks.

"It is important that the Lebanese army will be accompanied by an international force that will enable it to reach the south in an organized manner, and to leave the place clean of Hezbollah," Israeli Foreign Minister Tzipi Livni said.

Some soldiers said Israel was having trouble controlling even the small strip it was already occupying.

"The biggest problem is still the existence of Hezbollah fighters all over the place, even though we have most of the territory under control," said Maj. Avi Ortal, an officer in a reserve brigade in southwestern Lebanon.

"Hezbollah are good fighters. They know the territory. They live there and they have had six years to build compounds," he said.