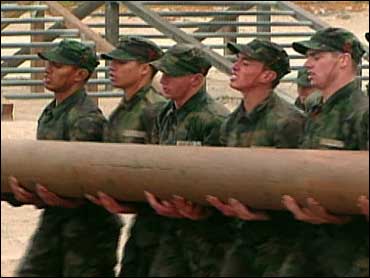 "Hell Week" for soldiers training to be Navy SEALs is five days and nights of the most grueling military training ever devised.

But the training's so tough the SEAL command had been falling behind, failing to produce enough new SEALs.

Explains Navy SEAL Lt. Rorke Denver, "Since, you know, post-9/11 operations kicked off, the amount of successful operations has just been staggering. So I think everybody looked at that and said, 'Wow, we need more of these guys.'"

Only 20 to 30 percent of men are expected to make it through SEAL training. Commanders want to raise that pass rate to 50 percent -- but without lowering standards. So they're targeting new candidates who may not have even considered a career in the military.

They're looking at young athletes who excel in sports requiring endurance and discipline, like rugby, wrestling, swimming and water polo.

Terry Schroeder coaches the U.S. Olympic water polo team. He's helping get the word out to top high school swimmers that the Navy SEALs are looking for young men like them.

"I think there's a lot in common," Schroeder says. "We learn to battle, we learn to work hard."

Swimmer Jonathan Imbert has signed up. "It's putting yourself on a team with maybe 10, 11 people and doing what an entire army might have to go and do," Imbert says.

Imbert's next stop is a new two-month Olympic-style pre-SEAL training program: from workouts, to sports visualization, to a psychological screening test.

Recent Hell Week inductees did the pre-training before they arrived, and something's working. Out of a 111 who started, 75 survived Hell Week -- one of the largest classes ever to make it through.