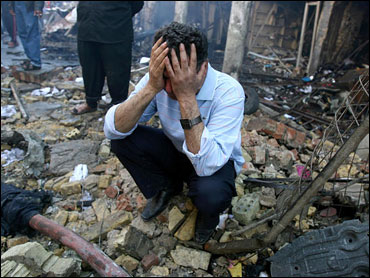 So how goes the surge?

It depends where you are really.

Allen Pizzey of CBS News has been in the Shiite slum of Sadr City, and, quite frankly, it looks like the bad guys have left town.

That's good strategy if you're Muqtada Al-Sadr: Tell the death squads to take a holiday and when the Americans let Iraqis take over, see what happens.

No such luck in the Sunni triangle. The old Baathists and al Qaeda in Iraq types aren't going anywhere. Six Americans were killed in Sahladin Province Monday and three more were killed in Baquba, an area with mixed Shiite and Sunni population.

As much as it doesn't seem possible, the war in Iraq only continues to get worse.

Monday, a car bomb exploded in Baghdad in the book market. Twenty people were killed and another 60-something injured.

The book market was a last vestige of civilization in a city where killing has become the only daily truth, and there's nowhere left to run — both Syria and Jordan have begun to close their borders to refugees.