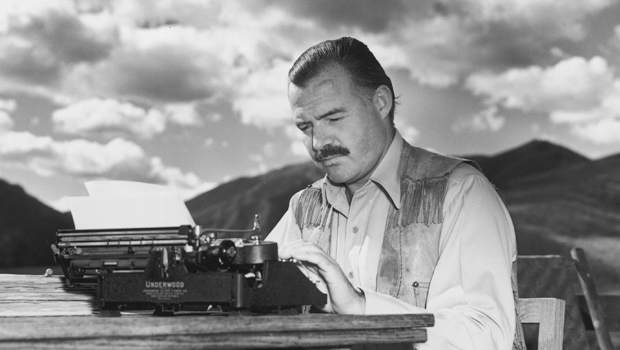 Ernest Hemingway was a man of letters in more ways than one. The celebrated author of many books also had many friends he wrote letters to. And as Rita Braver now shows us, more than 50 years after Hemingway died, his writing still commands our attention:

In a rare recording, Ernest Hemingway described his work on a play about the Spanish Civil War, even as it raged around him in Madrid:

"While I was writing the play, the Hotel Florida, where I lived and worked, was struck by more than 30 high explosive shells. So if it is not a good play, perhaps that is what is the matter with it."

But in 1938, The New York Times said "The Fifth Column" WAS a good play, one of many works where Hemingway explored the agony of war.

"He experienced war on many different fronts, and he hated it passionately," said Sean Hemingway, Ernest's grandson. Though born after his grandfather's death, Sean is steeped in family history.

He says he understands why Hemingway is considered one of the most influential writers of the 20th century, with a series of landmark works that earned him the Nobel Prize for Literature. "He illuminated the human condition," said Braver.

"That's absolutely true," said Sean. "He's able to capture those emotions in a very direct way, that you read it and you feel it."

And now there is renewed interest in Ernest Hemingway. In the wake of the recent attacks on Paris, "A Moveable Feast" -- his love letter to the City of Light -- sold out on Amazon.

He first traveled to Paris in the 1920s, part of the "Lost Generation" of expatriate writers and artists, and introduced himself to the likes of Gertrude Stein, Ezra Pound and James Joyce, and was introduced to artists such as Picasso and Miro.

Declan Kiely, curator of a new Hemingway exhibit that's been packing them in at Manhattan's Morgan Library, says it was Hemingway's 1926 novel, "The Sun Also Rises," that put him on the map. He showed Braver a telegram from Dorothy Parker in New York, writing to Hemingway in Paris: "Baby, your book is knocking 'em cold here. Isn't it swell? Love, Dottie."

Made into a film starring Ava Gardner and Tyrone Power, it's the story of wild times and unconsummated love set in Paris, and Pamplona, Spain. The story of a World War I veteran with a devastating war injury.

One person who appeared not to fall in love with "The Sun Also Rises" was Hemingway's mother.

"I think it can be said that she actively reviled the book," said Kiely. "She told him that 'Every page fills me with a sick loathing.'"

Undeterred, Hemingway developed a reputation for living it up to write it down -- a lover of fine liquor, beautiful women (he was married four times), and great adventure.

Hemingway biographer A.E. Hotchner shared many of those adventures.

"Can you believe it? How did that happen?"

The two met in 1948. "He really became a father figure to me," Hotchner said.

"At that point the things he had been interested in -- shooting big game, bull fighting -- they were all very manly sports," said Hotchner. "But that wasn't Ernest. I mean, Ernest wasn't a braggadocio, bull-fighting guy."

Neither was Hotchner, but Hemingway somehow convinced him to get into a bullring in Spain -- yes, with real bulls -- even buying him a matador suit.

"He said, 'Just remember, don't lean on anything, that makes the suit look bad,'" Hotchner recalled.

"Why'd you go along with this?" Braver asked.

"I could no more back out of that than fly!" he laughed.

"You couldn't say 'no' to Ernest Hemingway?"

Luckily, there were no mishaps. And Hemingway never let his fun interfere with his work -- the constant rewriting, the constant searching for a better phrase, a better word. "Yeah, absolutely. Hemingway was completely ruthless with himself," curator Kiely said. "Would throw away what other writers would probably have held onto and tried to use."

In later years Hemingway spent much of his time in Key West and Havana, often aboard his boat. His novel of a fisherman's epic struggle, "The Old Man and the Sea," won a Pulitzer Prize in 1953. The Nobel came a year later.

But then, the plunge into madness began.

In his latest book, "Hemingway in Love," Hotchner describes the writer's increasing depression and paranoia, leading up to his death from a self-inflicted gunshot wound at age 61.

It was front page news -- the story of a man whose life and work still have the power to move us.

"Through it all was this incredible man, truly a genius of his kind, who had an attitude toward living and life that was like no other I had ever met, before then or after," said Hotchner. "He was an original."