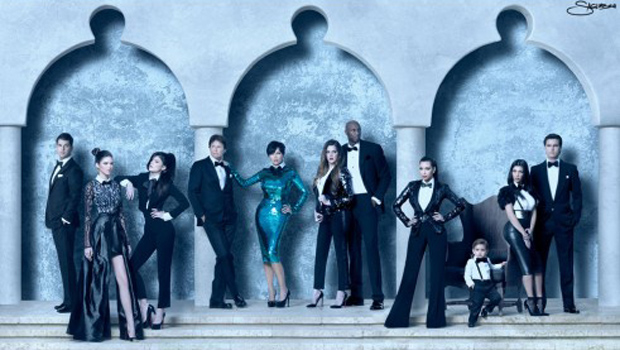 (CBS) Nothing the Kardashians ever do is understated, including their Christmas card - which this year also featured a 3D version.

"I love our family Christmas cards shoots," Kim Kardashian wrote on her blog. "I think this one looks amazing!"

This year's card features the entire clan all glammed out in black tie, including Kourtney and Scott Disick's 2-year-old son Mason, who struck a pose in a bow tie and suspenders. One face that was missing was Kris Humphries, who Kim was married to for only 72 days before calling it quits in October.

"There's nothing I love more than getting everyone together for the Christmas card shoot!" wrote Kourtney on her blog. "I love everyone's matching bow ties!"

The card was shot by Nick Saglimbeni in 2D as well as in a 3D version, which can only be viewed with special glasses.