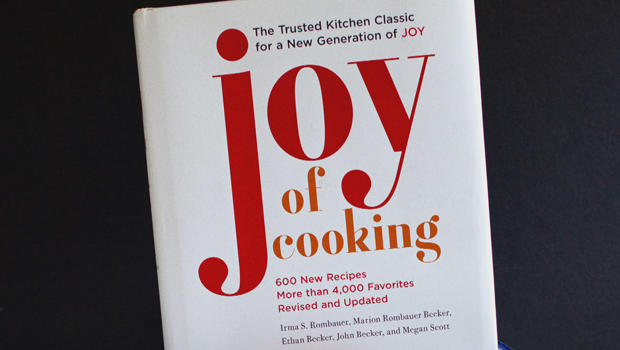 On a recent Saturday in Portland, Oregon, the farmers' market was a cornucopia of colors, and tantalizing aromas wafted through the brisk fall air.

"It's our happy place," said John Becker, who with his wife, Megan Scott, where there to choose freshly foraged mushrooms for their roasted mushroom lasagne.

It's one of 600 new recipes in the latest edition of that kitchen classic, "The Joy of Cooking," published by Scribner's (a division of CBS).

"We know that more and more people are trying to eat less meat," said Scott. "Even if they're not going vegan or vegetarian."

They have been busy trying out new recipes, and testing old ones, for nine years. Scott said, "We ended up testing probably 1,500 recipes from the previous edition. As we tested them we would do, we call them 'recipe genealogies.'"

For Becker, recipe genealogies are also family genealogies. His great-grandmother, Irma Rombauer, wrote and published the first "Joy of Cooking" in 1931, after her husband, who had lost everything in the stock market crash, committed suicide.

"She didn't have anything to fall back on, and she had to be creative," said Scott.

Not all of Irma's family or friends thought writing a cookbook was a good idea.

According to Becker, "Irma was always wanting to get back to the party."

"She was much more of a socialite than a cook," said Scott. "So, I think when she wrote 'The Joy of Cooking' a lot of people were surprised because she was not known for her cooking. But she knew the importance of being able to get food out of the kitchen and onto the table so you could get back to your life."

And something about the way Rombauer spoke to her readers caught on: "She was not there to be, like, the Home Ec authority," Becker said. "She was there to be that friend who is helping you through this."

That resonated with her readers, and it has ever since. Twenty million copies later, it still does.

Stephanie Kurzenhauser bought her copy of "Joy" in college: "It was a book that I not only got out when I was ready to cook something; it was a book that I actually sat in a chair with a cup of tea and just read for the pure enjoyment of it."

Updating "Joy" is a family tradition, passed down through the generations (as the cookbooks are). Irma's daughter, Marion Rombauer Becker, worked alongside her mother, and then on her own. "Marion was definitely more of a researcher, she was a little more thoughtful," said Scott.

Marion's son, Ethan, took over after that. Now it's his son John's turn. "I had never heard anyone in the family say specifically, like, 'We hope that you take this book on,'" he said.

At first, he wasn't sure he wanted to follow in the family footsteps. "Actually it was reading a passage from the 1963 dedication that Marion wrote that kind of changed my mind," Becker said. "'I hope that my sons and their wives continue this book beholden to no one but themselves and you [the readers].' Everything became very clear to me at that point."

"She spoke to you?" said correspondent Serena Altschul.

He also met Megan, who was working at a bakery. She recalled: "I was talking to a co-worker of mine about 'Joy of Cooking,' because I loved the book. And he said, 'Well, didn't you know that the guy whose family wrote that book works at the coffee shop down the street?' And I was just like, 'That can't be true.'"

But it was. And they both loved cheese. Scott decided, "I can date this person. He likes blue cheese. We're good!" she laughed.

They've been cooking and writing together ever since, inspired by Irma Rombauer's fearlessness. Becker laughed. "I still don't really understand how she was able to work up the gumption to do it."

Try these recipes from the latest edition of "Joy of Cooking":