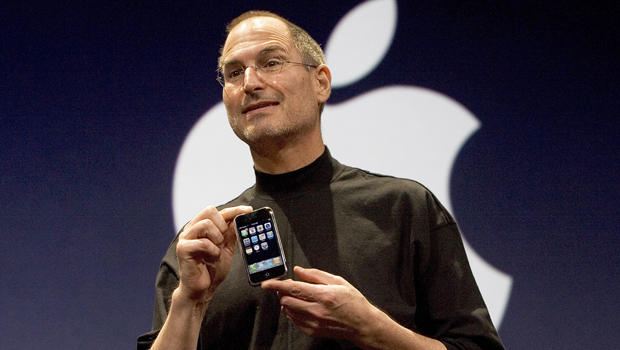 This morning we're marking a major birthday,  not of a person, but of a device. Amazing upon its release ten years ago this week, the gadget is all but ubiquitous now. David Pogue, tech critic for Yahoo Finance, reports our Cover Story:

Ten years ago this week, the iPhone arrived in stores -- and the world was never the same.

Because of the iPhone, hardly anyone buys maps anymore, or pocket cameras, or watches.

But long before we became a nation of distracted drivers, distracted walkers, and distracted dinner companions, cell phones were clunky. The Blackberry was king. And Apple co-founder Steve Jobs was working in complete secrecy at the company's California Headquarters on a device that would soon change

In January 2007, Jobs took the stage to unveil it: "An iPod, a phone, and an internet communicator. ... Are you getting it? These are not three separate devices. This is one device. And we are calling it iPhone."

That iPhone wouldn't actually go on sale for another six months. During that time, nobody outside Apple was allowed to see the phone or touch the phone.

The hype machine went into overdrive, especially after 40 million viewers saw this commercial on that year's Oscar broadcast:

And then, two weeks before the phone went on sale, Apple quietly handed iPhones to four tech reporters to review: Steven Levy, editor in chief of Backchannel, who worked at Newsweek at the time; Ed Baig, of USA Today; Walt Mossberg, the executive editor of The Verge, who was then at the Wall Street Journal;  and Pogue, then of The New York Times.

"We had two days between the time our review came out and the thing went on sale," said Baig. "I have never been more popular in my life. I wish I had this thing in high school, you know?"

In celebration of the iPhone's tenth birthday, the first four people outside Apple ever to use an iPhone sat down to reminisce.

Levi recalled how Jobs called all of them while they had it. Repeatedly, added Mossberg: "Oh yeah, he called me multiple times a day. 'How's it going?'  'You know Steve, it's not the way I do reviews. We'll talk. But don't worry about it.'"

There were features missing from that first iPhone: It had no front camera, no flash for pictures, it didn't have cut-and-paste. It couldn't record video. And you couldn't send a picture as a text message.

The most radical aspect of the iPhone was that it was all touchscreen. It had no physical keys for typing!

"After three days," said Mossberg, "I was ready to throw this thing out of the window for trying to type on glass."

"It's ten years later," said Levy, "and half the emails I get still have a little message underneath saying, 'Typed on phone, forgive typos'!"

On the other hand, making the entire phone a screen unleashed a world of possibilities. It was a huge canvas for photos, videos, maps and web pages. It could change its look for each app. And it meant that Apple could design a whole new way to interact with machines.

In 2005, Dutch software designer Bas Ording was at Apple designing software experiments for a multitouch screen, figuring out how you would navigate a computer without a keyboard, mouse, or stylus -- just touching things with your finger.

"We had to think about, how can you type on it? Or how can you manipulate images on it?" Ording said.

The idea of the touchscreen came before anyone started putting it on a phone. "At some point, I think, probably Steve thought, like, 'Oh, this would be great to put on a phone,'" Ording laughed. "So that's why we went in that direction."

Part of what made the iPhone a hit was that objects in that touchscreen world have their own physics. You can thank Bas Ording for some of it, like how lists have momentum when you flick them, or how they do a little bounce when you get to the end.

"And now, a billion people are using your idea," said Pogue.

"Is it a billion? That's a lot!" Ording laughed.

"Did anyone, at the time, on this team, have any idea how big this could be?"

A year after the iPhone came out, Apple introduced the App Store, a central catalogue of free or cheap little programs written by programmers all over the world. That's when iPhone sales really went through the stratosphere.

And just those apps have launched entire industries! Think of Uber, the ride-sharing company valued at $68 billion. Or Instagram, which Facebook bought in 2012 for a billion dollars.

These days, of course, the iPhone isn't the only game in town. In 2008, Google created a look-alike phone design called Android, which it gives away to phonemakers. Today, Android phones outsell the iPhone.

Since Steve Jobs died six years ago, a lot of people say Apple doesn't have an idea man anymore. "Is Apple's sun setting now? Are they done with innovation?" asked Pogue.

"Well, I do think they're a victim of their own success," said Baig. "How often can you come out with something that changes the world? I mean, we're all unfair, perhaps, in the media sometimes: Oh, they haven't had a hit lately. Well, who else had a hit lately? It's not an easy thing to do."

So on its tenth birthday it's time to ask, where does iPhone fall on the scale of humanity's greatest inventions? Is it right up there with the television? The car? Electricity? Fire? Hard to say, but millions of people would agree, the iPhone changed everything.

"We don't have Steve Jobs around to ask -- we would all be getting interviews with him right now because of the tenth anniversary -- but I don't think that he foresaw the hugeness of it," Mossberg said. "I don't think anybody did."