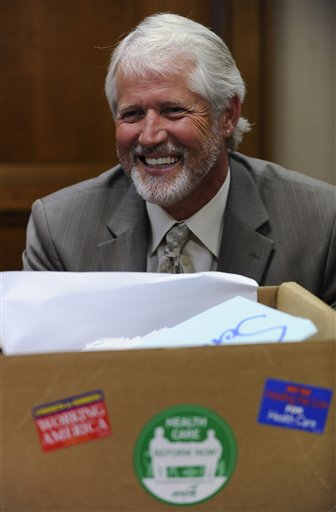 When it comes to the health care battle, President Barack Obama and congressional Democrats are learning that with friends like labor unions, they barely need Republicans to muck things up.

The AFL-CIO, the American Federation of State, County and Municipal Employees and other labor groups are insisting that legislation include government-run health coverage to compete with private insurers. Though popular with the public, the idea _ disliked by many moderate Democrats in Congress and virtually all Republicans _ was omitted from the bill the Senate Finance Committee approved Tuesday. Obama likes the so-called public option but indicated he could live without it.

As Democratic leaders stitch together bills by five different committees to take to the House and Senate floors, unions also are working to derail a plan in the Finance bill that slaps a $200 billion excise tax on expensive health care policies. Earlier this year, labor helped shoot down a proposal that could have raised hundreds of billions of dollars by taxing health benefits provided by employers.

Either tax provision would provide a major chunk of the effort's $900 billion, 10-year price tag. Without them, it's harder for Democrats to find a way to pay to expand coverage to nearly 50 million uninsured Americans and help low-income people afford their insurance _ an irony considering unions' history of fighting for working families.

"We have serious and legitimate concerns," said Chuck Loveless, AFSCME's legislative director. "We're at a critical juncture with regard to health care reform, and we're doing our utmost to help shape the bill."

Undeniably, labor has been invaluable to Democrats trying to muscle a health overhaul through Congress, starting with millions of votes, armies of campaign workers and fat contributions to help elect friendly lawmakers _ including Obama himself. This year, unions have supplied hordes of members to press legislators, along with millions of dollars for advertising and lobbying, to build pressure for revamping the medical system.

Yet like all interest groups, labor has pushed for health overhaul on its terms, including priorities that have caused migraines for Democrats. The effort illustrates how labor is able to affect far more than the country's 16 million union members, and shows how interest groups can be a two-edged sword for the political parties they support.

"Republicans and Democrats have their constituents, their base," said Sen. Johnny Isakson, R-Ga. "When they're in power, the base expects to be at the table on the issues of the day. Organized labor has a lot invested in the Obama administration."

Labor unions spent $46 million for Obama's presidential candidacy last year and another $7 million opposing his rival Sen. John McCain, R-Ariz., according to the nonpartisan Center for Responsive Politics. They have contributed $14.3 million this year to members of Congress, with more than 90 percent for Democrats, the center says.

Lawmakers are usually reluctant to criticize such a useful ally.

"They're expressing their point of view on implementation," Senate Finance Committee Chairman Max Baucus, D-Mont., said last week when asked if unions were complicating the health care drive. "But the underlying point is they're for health care reform."

Unions have vociferously fought for the public option and other priorities in private meetings with White House officials and congressional leaders, according to numerous participants. They've also had no reluctance to do it publicly.

Twenty-seven unions ran a newspaper ad Wednesday threatening to oppose the Finance bill, despite White House requests to soften the ad's tone. AFL-CIO president Richard Trumka told ABC News last month that his message to Democrats opposing a public option was, "Do so at your peril."

"People come to this with strong feelings and there's no doubt that even some of ourallies are going to make some of their strong feelings known," White House spokesman Bill Burton told reporters Thursday.

Last week the AFL-CIO, along with many of its 57 member unions, flexed its muscle again.

The federation brought more than 100 labor leaders from 27 states to the capital for three days of lobbying, while generating more than 34,000 phone calls and delivering thousands of letters to Congress. Many meetings were with moderate Democrats leery of the public option, to whom visiting union officials bluntly expressed their priorities.

"I just have very serious concerns in creating a new entitlement program that's completely funded by government or run by government," Sen. Blanche Lincoln, D-Ark., told visiting union leaders from her state at one meeting last Wednesday attended by a reporter.

"We've been carrying this load long enough," Alan Hughes, president of the Arkansas AFL-CIO, told her. "We just don't want to get stuck with any additional tax."

The AFL-CIO also helped Rep. Joe Courtney, D-Conn., collect the signatures of 173 Democratic House members on a letter to Speaker Nancy Pelosi, D-Calif., urging her to reject Baucus' tax on high-cost insurance plans. The letter warned that the tax would hit many middle-income families.

"We had a lot of people back home asking if they'd sign the letter," Bill Samuel, AFL-CIO legislative director, said of union pressure on lawmakers.

In a sign of the impact of opposition by labor, insurers and others, Senate Majority Whip Richard Durbin, D-Ill., said Wednesday Democrats would probably change the bill to tax fewer policies.

Even so, the labor movement has not been monolithic.

The Service Employees International Union, representing 2 million health care and other workers, supports optional public coverage and opposes taxing high value policies. But it has shown more flexibility in what it will accept, say many participants in the process. And the union has helped form several coalitions with health care providers and business interests to help build momentum for legislation.

"Our key priority is getting something done," SEIU president Andy Stern said in an interview.