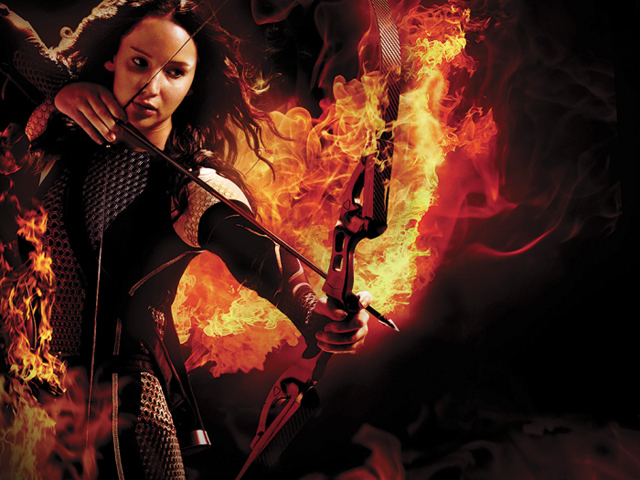 The anticipation for "The Hunger Games: Catching Fire" is heating up -- so perhaps it isn't a surprise that the film's heroine is surrounded by flames in a new set of photos promoting the anticipated sequel.

Katniss Everdeen (Jennifer Lawrence) stands in a burning forest in one of the images, which were first published by Variety. In another, she takes aim with her bow and arrow as fire swirls around her.

There is also a black-and-white, side-profile image of Peeta (Josh Hutcherson) that looks like it wouldn't be out of place in a fashion magazine, and a similar shot of Johanna Mason, one of the new characters introduced in this film (and played by Jena Malone). Elizabeth Banks makes an appearance as the always colorfully-dressed Effie Trinket in another photo, posing next to a stoic, masked Peacekeeper.

The images are all part of a campaign crafted by Lionsgate marketing chief Tim Palen, the man who set the books' iconic Mockingjay logo ablaze and introduced Capitol Couture, an online fashion magazine featuring the elaborate fashions of Panem's Capitol.

His vision has received the stamp of approval from Suzanne Collins, who penned "The Hunger Games" trilogy.

"I'm thrilled with the work Tim Palen and his marketing team have done on the film," she told Variety via email. "It's appropriately disturbing and thought-provoking how the campaign promotes 'Catching Fire' while simultaneously promoting the Capitol's punitive forms of entertainment. The stunning image of Katniss in her wedding dress that we use to sell tickets is just the kind of thing the Capitol would use to rev up its audience for the Quarter Quell [the name of the games in "Catching Fire"]. That dualistic approach is very much in keeping with the books."

"The Hunger Games: Catching Fire" arrives in theaters on Nov. 22. The final trailer for the film was released on Sunday (watch it here). See below for the rest of the new photos: