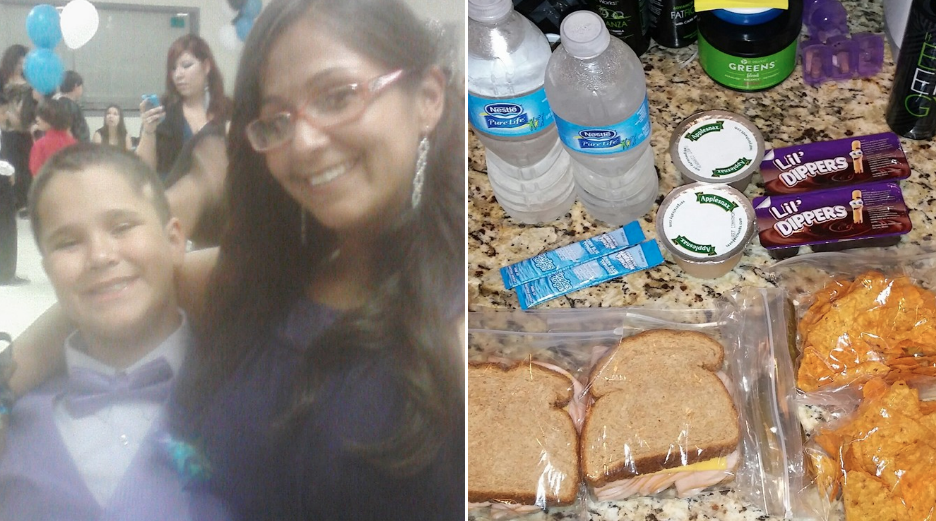 For months, Josette Duran has been packing her son an extra lunch to bring to school simply because he asked her to.

The mom didn’t ask questions. She thought he was just hungry, but then she found out the truth.

One day, the mom from Albuquerque, New Mexico, finally asked her son, Dylan: “Are you not getting full, boo?”

The boy spilled the real reason why he needed two bagged lunches: “Mom it’s for this boy. He only eats a fruit cup for lunch. Can you make him lunch too? I don’t think he has lunch money.”

Duran’s heart sank and melted at the same time. She was proud of her son, but she also felt awful for his new friend.

“It’s not for praise or anything; it’s pretty -- pretty intense,” Duran shared the story in a Facebook live video.

When the mother of the little boy found out what the Durans were doing, she contacted the school, hoping to pay Duran back for her kindness.

“She says, ‘I know this isn’t much, but I just got a job, and I know you’ve been feeding my son,’” Duran explained on Facebook.

Instead, she continued to pay it forward.

According to CBS affiliate KCCI, the girls’ volleyball team Duran coaches raised more than $400 to pay Duran back for her good deed. But Duran said she couldn’t accept that either, and instead, donated the money to the cafeteria.

“We paid up all the past due accounts for all the kids who need lunch,” Duran said. “So now, nobody in that school owes any money, and now everyone can eat.”

Duran says she was Dylan’s number one fan before, but now she’s even more in awe of her giving son.

“My cup runneth over,” the satisfied mom wrote.