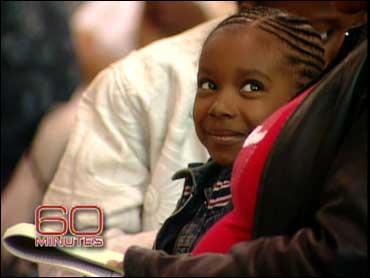 Harlem has long been the spiritual capital of black America. In its heyday during the Harlem renaissance, it was a wellspring of politics, music and art. But over the years, the neighborhood suffered a steady decline and came to symbolize the worst of urban poverty and decay. Today, there's a new renaissance under way in Harlem, with the construction of new buildings, businesses and schools.

One of the people leading the charge is Geoffrey Canada. As correspondent Ed Bradley reports, his vision, quite simply, is to save children, and he has amassed a staggering amount of private money — more than $100,000,000 — to realize his goal. His testing ground is a 60-block area in central Harlem that he calls "The Harlem Children's Zone."

The Harlem Children's Zone is an area that covers less than one square mile and is home to some 10,000 children. On the ground, the neighborhood is slowly coming back to life, with newly renovated townhouses standing side by side with buildings that have fallen victim to violence and despair, local businesses next to national chains. But despite all the renewal, nearly all the children live in poverty — and two-thirds of them score below grade level on standardized tests. That's why Canada, a graduate of Bowdoin College and the Harvard School of Education, has claimed this territory as his own and is trying to save it, block by block, child by child.

He has made a bold promise to the parents who live in the zone.

Canada's ambitious experiment aims to prove that poor kids from the inner city can learn just as well as affluent kids from the other side of America. He has flooded the zone with social, medical and educational services that are available for free to all the children who live here.

He has raised a lot of money to try to do that. The budget of the Harlem Children's Zone is $36 million a year — and growing. Only a third of it comes from the government; the rest comes from private donations. That money made it possible for Canada to open his own charter school in a new $42 million building. It's called "The Promise Academy."

Classes have a ratio of one adult for every six kids as well as state-of-the-art science labs, a first-class gym, and a cafeteria that looks more like a restaurant. Only healthy food is served here, to help fight obesity.

But living in the zone doesn't guarantee a slot in the Promise Academy, which opened its doors a year and a half ago to only 200 kindergarteners and sixth graders. It is adding new grades every year and will soon educate some 2,300 kids through high school.

Because of the enormous demand, admission is by lottery. Parents watch as the wheel spins for the highest stakes imaginable: the future of their children. One mother learned that her son's number did not come up.

"We spent a lot of money trying to make sure these kids get a good start because we wanted them to go into our school," Canada told the disappointed mother. "I know, yes they have a good start," she replied. "And so, I'm as disappointed as you all are that your child didn't get in," he told her.

"After my first lottery, I said, we're gonna have to open more schools. You sit there and watch those parents, it's the saddest thing I've seen. It really is," Canada tells Bradley.

"I grew up in a very similar condition to a lot of our children," he explains. "Single mom, she had four kids, overwhelmed, doing the best she could do, living in tenements with roaches and mice and rats. That's something that's driven me, I think, all of my life."

It is Canada's passion and commitment that inspired Stanley Druckenmiller to donate tens of millions of dollars to the Harlem Children's Zone.

"I invest in companies and other things for – for a living. And I can tell a good management and a good leader when I see one," says Druckenmiller, who made his personal fortune, estimated at more than $1 billion, as one of the most successful hedge fund managers on Wall Street.

Druckenmiller admits he initially had reservations about project. "I was sort of terrified by the financial challenge," he recalls.

As chairman of the board of the Children's Zone, Druckenmiller has enlisted the financial support of other philanthropists. He also helped develop a business plan that demands accountability and results.

"So if they don't produce, you're saying that you'll pull your support from that?" Bradley asked.

"That's a little harsh," Druckenmiller says. "But yeah, let me put it a different way. The intensity and level of the support will be directly related to outcomes that are produced."

To get the outcomes he wants, Canada takes money from his budget and puts it directly into the pockets of his students. He hands out cash every month to the children with perfect attendance at the Promise Academy.

Canada says the notion of bribing students doesn't bother him one bit. "Why?" he asks. "If I know that those kids are gonna fill our penitentiaries, that we're gonna be spending in New York City 45 and $50,000 a year on that child for 20 years, I mean $20? Doesn't bother me one bit."

To reach as many children in the zone as possible, Canada put reading labs in public elementary schools and provided SAT tutoring to high schoolers

He teaches karate to instill discipline and offers medical help for the disproportionate number of children here who suffer from asthma. But in order to save the children, Canada says he has to save their parents first.

And that begins at the Baby College — a nine-week workshop that literally teaches new parents how to raise their kids so that they will enter school ready to learn.

Parents also learn good habits — like how to impose discipline without physical force.

That may sound obvious, but it wasn't to Darlene Anozier, who was orphaned at the age of seven and grew up in state facilities. Before attending the Baby College, she says she didn't know how to discipline her son without hitting him.

With her husband on disability, providing for her family is often difficult. So the Harlem Children's Zone has helped Darlene buy provisions when she's run out of money and also referred her to an adult education class to pursue her GED, so she can try to keep up with her 7-year-old son, Richar.

"I want him to know education is the most important thing," she explains.

"Yeah because they got people, words that I don't know," Richar explains.

"But you'll learn new words every year so that by the time you get to college you'll know all those words," Bradley reassured Richar.

"Yeah, but they're not gonna teach me those words because they'll think that I'm so smart I know those words," he replied.

Asked if she still worries about her son's future, Darlene says, "No."

That's because Richar, now in first grade, has exceeded her expectations at the Promise Academy, where the school day is longer, summer vacation lasts only three weeks, and many kids go to school on Saturdays. Canada is able to run the school his way, free from the restrictions of the public education system that he says has been failing Harlem's children for so long.

"We could not run a school under the current rules and regulations with the unions. It's impossible. It's just impossible. You can't fire teachers. Look, we fired three teachers last year. Ed, I will guarantee you we fired more teachers than the whole island of Manhattan in all the public schools," says Canada. "Now that's crazy. You come in, you teach. The kids all fail. You get to go home at three, and you get summers off. Now what kinda job is that?" he asks.

It costs $16,000 a year to educate a student at the Promise Academy; while $10,000 of those dollars come from the city, the rest is from the school's coffers. Though the price tag may seem high, Canada says the investment is paying off.

"Our 4-year olds, they're performing higher than the kids in general. Our kindergarteners are all on grade level. They're doing terrific, and way above what you would consider to be the national norms right now in how these kids are tested, so we're feeling really, really good about that," says Canada.

But Canada acknowledges he's fighting an uphill battle to help the older kids in the zone who are not enrolled at the Promise Academy. That's why he runs an after-school program for them. In a city where half of all teenagers don't finish high school on time, the graduation rate for students who come here is roughly 95 percent. Still, when 60 Minutes sat in on the center's weekly rap session, we saw firsthand the challenges that Canada and his counselors are facing.

"High school right now, to tell you the truth, I'm saying to hell with it," says Shawn Seale, a struggling sophomore.

Bradley asked him how he saw his future in five years from now, when he's 21.

Where else would he be?

"Locked up or dead, man, I don't know," the teen replied.

"And that's OK with you?" Bradley asked.

Seale is still in high school — and still coming to the after-school center. He and all the other teens at the center are eligible for up to $150 a month if they complete their work. As for Canada, he has been meeting with groups from across the country that are interested in creating children's zones in their cities.

"You ever hear those people who say, you know, 'this is crazy, you can't do it,' and think that maybe you bit off too much?" Bradley asked Canada.

"As long as I am here, we're gonna push this envelope as hard and as far as possible," Canada says. "And I think that in the end, it's gonna be important that we demonstrate that we can get even the toughest kids to make it in America."

IMF head Kristalina Georgieva on the 2023 global economy
Thanks for reading CBS NEWS.
Create your free account or log in
for more features.
View CBS News In
CBS News App Open
Chrome Safari Continue
Be the first to know
Get browser notifications for breaking news, live events, and exclusive reporting.