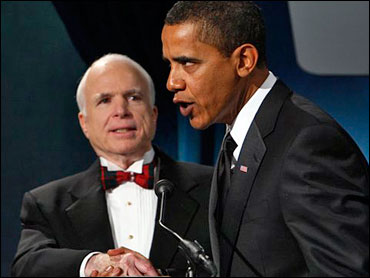 President-elect Barack Obama's outreach to Republicans may be generating goodwill on the other side of the aisle, but the honeymoon is likely to be short-lived. There's just too much distance between Obama and congressional Republicans on too many key economic, social and foreign policy issues.

There are, however, some Republicans who stand to have a less adversarial relationship with the new administration. Either their past history or present statements put them at the top of the list of GOP members who are expected to work closely with the White House, even if it means bucking their own party.

Here is Politico's list of the five Republicans most likely to embrace Obama:

As curious as it sounds, Obama's rival for the presidency could end up being a key ally.

On issue after issue, from campaign finance to HMO regulation to immigration reform, McCain has shown a willingness to reach across the aisle - a habit that hasn't endeared him to his own party.

Indeed, former Sen. Rick Santorum (R-Pa.) said he believes that McCain is prepared to launch a national rehabilitation campaign that will lead him to a strong alliance with Obama."I believe Obama has an ace in the hole among Senate Republicans. This unlikely ace can deliver not only the GOP moderates needed to break a filibuster but also the stamp of bipartisanship: the 2008 GOP standard-bearer, John McCain," Santorum recently wrote in The Philadelphia Inquirer.

Obama is certainly mounting a campaign to woo his former rival. Just two weeks after the election, the president-elect invited McCain to Chicago, where the two chatted about the economy, government reform and fiscal responsibility - one of the earliest meetings of two presidential opponents. And Obama's inaugural committee hosted a dinner this week paying tribute to McCain for his service in government.

As Santorum pointed out in his column, there are many issues where Obama and McCain are not ideologically far apart: global warming, immigration reform and federal funding for embryonic stem cell research.

On the economy, McCain could become a crucial collaborator as Obama seeks to convince enough Senate Republicans to pass his proposed $825 billion stimulus package.

"There are not many times in history," he told Neil Cavuto of Fox News in early January, "that a president has come to office with as many challenges as the president-elect does, and that's incumbent, then, upon all of us to try and do all we can to work with him."

Few Republicans can claim a closer personal relationship with Obama than the senior senator from Indiana. Upon arriving in the Senate, Obama sought out Lugar as a mentor when both men served on the Foreign Relations Committee. To prove his bipartisan bona fides on the campaign trail, Obama regularly cited his work on Lugar's signature Nunn-Lugar nuclear nonproliferation bill.As part of their campaign to pass nuclear nonproliferation legislation, the two traveled together to Russia and Ukraine in 2005 to examine those countries' stockpiles of conventional weapons.

Lugar, rumored to be a potential secretary of state in the Obama administration, was even named as an honorary co-chairman of the inaugural committee. "When you've got a president who's trying to send a signal that he's trying to achieve bipartisan solutions, it makes sense that Lugar's going to play a very significant role in that," said Indiana political analyst Brian Howey.
"They have a great deal of intellectual affection and trust for each other. There are plenty of Republican presidents who really didn't pay much heed to Lugar in the past, and here he's got a president who's going to make Nunn-Lugar one of his top priorities."

One sign that Lugar will be a willing partner for Obama: Even as his Democratic colleague, Sen. Evan Bayh, broke with the president-elect in opposing the second round of bailout money, Lugar was one of only six Republicans to side with Obama.

As he mulls a run for Obama's old Senate seat in 2010, Kirk knows he won't get an endorsement from the president-elect. Still, whether he runs for reelection to the House or for the Senate, political imperatives demand that he work productively with the Obama administration.

Kirk's House district delivered 61 percent of the vote to Obama, giving him a strong incentive to play nice with the new president.

One of the leading centrists in the House - and one who has repeatedly won reelection in a Democratic-leaning district by emphasizing his independence from his national party - Kirk is already inclined to work across the aisle. As co-chairman of the Tuesday Group caucus, Kirk brings something to the table because he is well-positioned to rally other moderate Republicans on close legislation.

In an interview with Politico last month, Kirk said he hoped to work closely with Obama but that he also saw his role as a watchdog on the administration.

"The people of Illinois expect you to use your own judgment. They want you to work with the president wherever possible and hold members of his Cabinet accountable when needed," Kirk said.

Despite calling Obama a "socialist" in the final weeks of the presidential campaign, Voinovich may find himself agreeing with the president-elect more often than not during his final two years in the Senate.

The Ohio senator, who announced he would retire in 2010, has often been a thorn in the GOP's side, for opposing Republican-backed tax cuts and for his high-profile opposition to John Bolton's nomination as ambassador to the United Nations. Now that Voinovich is in the final stage of a political career that spans more than 40 years, he will be completely liberated from pressures to conform to his party's line.

Since his Jan. 12 retirement announcement, Voinovich has already voted with Obama on releasing the second round of bailout money, joining only five other Senate Republicans in support of the legislation. Despite his reputation as a fiscal hawk, Voinovich has said he is open to supporting Obama's proposed stimulus package.

Fresh off an election victory in which she touted her record of working across party lines, Collins has a chance to prove it.

She is one of the two most liberal Republican senators, according to 2007 National Journal ratings - the other is her Maine colleague, Sen. Olympia Snowe. And with Democrats just shy of the 60 seats necessary to block GOP filibusters, Collins will be one of the first Republicans Obama will look toward to break logjams.

She has already indicated that she's eager to work with the new president on climate change and health care reform, and has chatted with Obama's congressional budget adviser, Peter Orszag, about her legislative priorities.

"The people in my state are sick and tired of the hyperpartisanship and the gridlock that has blocked action on so many important issues that affect their lives directly," Collins told The New York Times after her 2008 reelection. "The message from this campaign is a rebellion against excessive partisanship and a call for people to work together."
By Josh Kraushaar