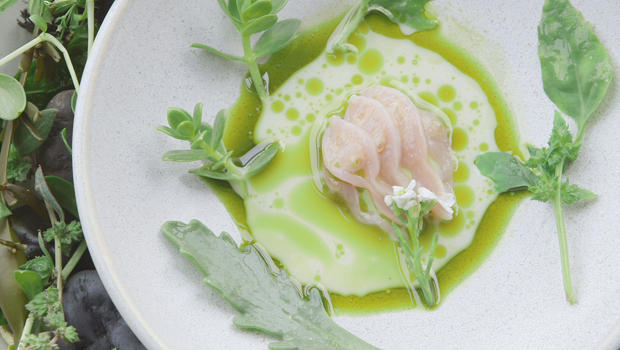 In his latest round of ISLAND HOPPING, Conor Knighton has leapt across much of the North Atlantic to the not-so-well-known Faroe Islands:

The Faroe Islands bill themselves as Europe's best-kept secret. So secret, in fact, that many people don't know they're in Europe. "In some cases, they think we're close to Egypt somewhere, so it's really warm and exotic!" said Levi Hanssen, who works for the Faroese Tourism Bureau, in the small capital city of Torshvan.

It's not "Pharaoh" like King Tut. It's F-A-R-O-E … 18 tiny islands in-between Iceland and Norway, officially part of the Kingdom of Denmark, and yet not quite Danish.

"We have our own language, which is another thing that surprises people," Hanssen said.

The rocky, remote Faroe Islands have just 50,000 citizens total, spread out among a patchwork of tiny, picturesque towns and villages. They're connected by an impressive network of roads and tunnels and ferries, far removed from the rest of the world.

"We realize that we live in a very remote place," Hanseen told Knighton. "We sometimes have this feeling of being like, you know, David against Goliath."

In the world of restaurant reviews, the Goliath -- the 800-pound gorilla -- is a giant inflatable man made out of tires. Every year, the Michelin Guide hands out its prized stars to the best restaurants in the world. And last year, for the first time ever, a Faroese restaurant brought one home -- to a small house, in a small village, on the side of a hill.

Poul Ziska, the head chef at Koks -- a 23-seat restaurant with one heck of a view – said of his Michelin star, "It was so unexpected. I did not think that they will come here this early on."

Many of the ingredients Ziska cooks with are found on the rocky shores down below his dining room. "Right now we're just gonna grab this seaweed here and use it for a sauce," he said.

Ziska grew up in the Faroe Islands, and he knows which weeds and grasses are the most delicious.

The limpets he scrapes off of the rocks, one by one, are washed and transformed into one of 19 courses served as part of a typical meal at Koks.

In the Faroe Islands, where most of the food is imported, Ziska was determined to stay as local as possible.

"You become much more aware of your surroundings when you have to kind of source the ingredients from around," Ziska said.

The volcanic, treeless landscape and the harsh weather make it difficult for much to grow here. Outside of the sheep (which are everywhere), there isn't much livestock. But there also isn't a place in the Faroe Islands that's more than three miles away from the ocean, so Ziska relies heavily on the sea.

"We do a lot of effort in plating it so that it looks like where it's from," Ziska  said. "We might serve, like, a mahogany clam on rocks with seaweed around, so you really get the full expression of where this-special product comes from."

After the Michelin announcement, foodies have started coming from all across the world just to taste Ziska's cuisine.

"There are people that will book a table at Koks before they actually book their flight to the Faroe Islands," said Hanssen. "So, it's definitely been something that's had a great effect on tourism in the Faroe Islands."

The Faroe Islands may not stay secret for much longer. And, where the scenery is still the biggest selling point, it would be hard to imagine a better ambassador than Ziska's food. It reflects the land he loves -- each dish a little postcard, on a plate.