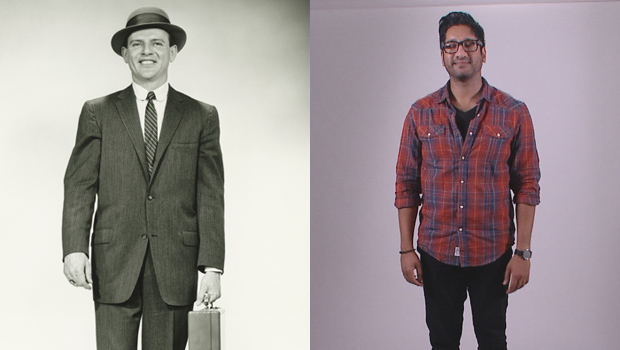 What does DRESSING FOR SUCCESS mean in today's changing workplace? Not what earlier generations believed, that's for sure. Faith Salie has the proof:

Things have certainly changed when it comes to getting dressed for work. These days, three-piece suits and pantyhose have been replaced by open-collared shirts and skinny jeans.

Welcome to the new business casual.

At Young & Rubicam (more casually known as Y&R), one of many companies where employees are all casual all the time, "Casual Friday" probably looks a lot like Monday, laughs creative director Leslie Sims.

But it wasn't always this way. Y&R dates back to the time when Madison Avenue meant "advertising," the "Mad Men" era. How times change!

"We always encourage everybody just be comfortable, because they're here a lot," said Sims. "We have really long hours."

Long hours, which often means punching the clock at home.

"I think, in general, in our culture, because of our mobile devices, we can and we do work from home," said Susan Scafidi, the director of the Fashion Law Institute at Fordham University.

"We work all the time, but we also play all the time. So we've really just stripped away the boundaries, in many ways, between work wear and casual wear. We might not want to present ourselves to our colleagues in our PJs. But we're probably writing our reports in our pajamas. So our pajamas are work wear."

Casual attire isn't for everyone. A number of Wall Street legends and leading law firms are still strictly suits and ties. But they're in the minority.

According to a Gallup study, only 12 percent of men wear suits every day, and just six percent of women report dressing in familiarly formal fashion.

Still, in an increasing number of offices, casual rules the day -- and it seems to start at the top.

"The most powerful person in the room is often the most casual, except for his or her accessories," said Scafidi. "Take a look at the watch and the shoes. We're absolutely still are signaling status via fashion, but we're signaling status in different ways."

Salie asked, "If you're a CEO and you're wearing a hoodie, what's your message?"

"Your message is, 'It's about my ideas. It's not about what I'm wearing,'" said Scafidi.

But the "laid back look" doesn't have its roots in Silicon Valley. Causal office wear dates back to Hawaii in the 1960s, to something called Aloha Fridays. Workers would dress down at the end of the week.

By the '90s, Levi's Dockers picked up on the idea and made it mainstream with an ad campaign proclaiming Casual Fridays, replacing shirts and suits with khakis and Polos.

Flash forward to 2015, and Casual Friday is dressing up.

Handshake is a Manhattan-based mobile software company swapping out the casual look for, what else? Formal Friday!

"Yeah. Sometimes just to give us an excuse to, you know, traipse out the wedding suits we've got," said CEO Glen Coates. "Or the cool blazer that we bought for whenever."

Coates says his company is sticking with the casual look, if for no other reason than it makes scooting around the office a whole lot easier.

"Yeah. You don't wanna get into a three-way scooter race in heels," Coates laughed. "I've tried. It doesn't go well!