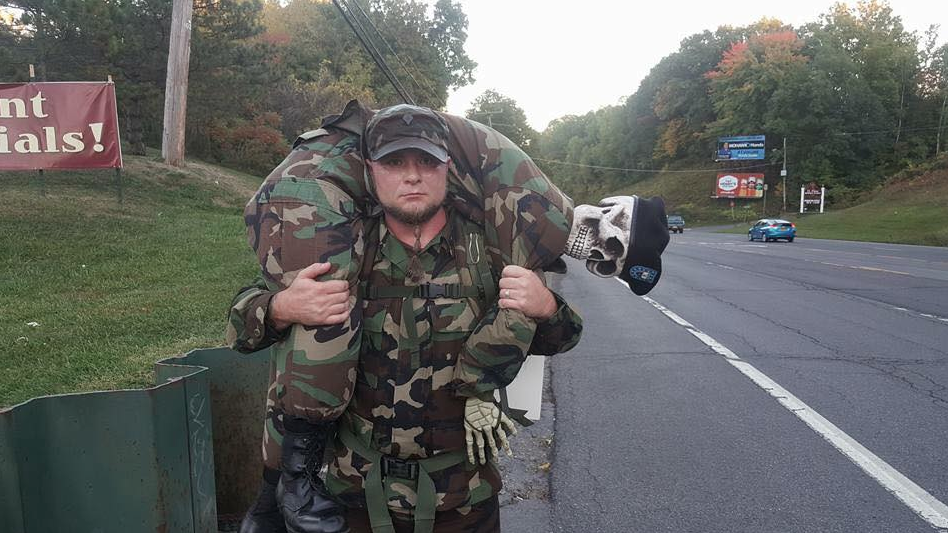 People on the streets of Troy, New York, stared as a man dressed in full military gear walked around the city carrying a large skeleton on his back.

One of those people, Stacy Kieper, couldn’t help herself.

She needed to know what this man was doing. So, she stopped and asked him.

Holding back tears, the man told her that he was raising awareness.

“When I asked what for, he told me he lost another friend to suicide yesterday,” Kieper explained in a viral Facebook post that has been shared more than 4,000 times. “His friend is a soldier too.”

Something inside Specialist John Newcomb, a U.S. Army veteran, snapped the night he found out a sergeant that he had served with was dead; it was the same night his wife suffered a second miscarriage.

“I was helpless and with no control over the loss of my child, so I lashed out at the one thing at the time I felt I could damage and do something about,” Newcomb told CBS News. “I compulsively started to create the skeleton dummy and honestly wasn’t really sure what I was doing until it was done.”

On average, 20 veterans a day committed suicide in 2014, according to a recent study by the Department of Veterans Affairs. In 2013, the VA reported that 22 veterans a day were committing suicide.

Newcomb can’t get that number out of his head: 22.

“Most people are unaware that there is even a problem,” the 36-year-old said.

That’s when he decided he was going to carry the skeleton along with 40 pounds of weight in his pack -- and the metaphorical weight of his fallen brother across his shoulders -- around his community for the next 22 days.

During his march, he remembered a conversation he had with his captain as he was approaching the end of his enlistment.

The captain “asked me if I wanted to go to war with the unit and planned on reenlisting,” Newcomb recalled.

“I would go if I had to,” Newcomb replied.

Newcomb said the orders to deploy to Iraq came in just 10 hours after he had signed out of Fort Hood, Texas. He’s surprised he wasn’t called back to duty, and now he marches to repay a debt he feels he owes to his fellow soldiers.

“I am passionate about this because every bit of the life I have now, I owe to all of them. I did not go to war, so it is time I start fighting the war they have been unable to since coming home.”

For the past six days, the veteran has been marching. His feet are blistered, his muscles are sore, but he says he’s not losing momentum.

He has a message that he hopes to send to his friends and every other soldier who has returned home -- to a world that may look completely different: “You are never too heavy. I will carry you!”