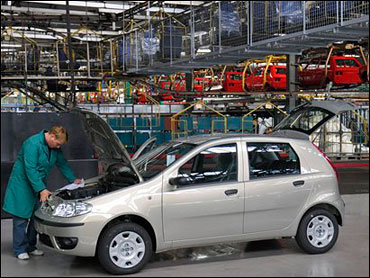 Why does a Yugo have a defroster on the rear window?

To keep your hands warm while you push it.

That's just one of the "Yugo jokes" about the cheap and much-maligned subcompact that won notoriety for being one of the worst cars ever exported to the United States.

Now, the last Yugo, once the pride of communist Yugoslavia's automobile industry, will roll off its Serbian production line Thursday in the central town of Kragujevac.

It will be missed here - but probably not in America.

Soon after it hit the U.S. markets in 1986, selling for the bargain-basement price of just $3,990, the boxy Yugo was derided by American car magazines "as barely qualifying as a car" and "an assembled bag of nuts and bolts."

U.S. owners complained of frequent engine failures and transmission problems - with the manual gear sticks sometimes detaching and ending up in their drivers' hands - in addition to passenger doors and trim parts going awol.

When the U.S. Insurance Institute for Highway Safety conducted crash tests of 23 compacts in 1986, the car with the worst results was the Yugo, with $2,197 worth of damage in slow speed crashes against a flat barrier.

Still, over 100,000 Yugo GVs - standing for Great Value - were sold in the U.S. before Yugo America - the company that imported it - went bankrupt and Washington imposed economic sanctions on Belgrade for fomenting ethnic wars in the Balkans in 1992.

In the U.S., Yugo has made several joke appearances in Hollywood blockbusters such as Die Hard 3. Artists in America also found inspiration in the flimsy tin-can structure, turning it into something more useful - like a queen size bed or a kitchen stove.

When sales started plummeting in the late 1980s, some U.S. dealers tried to clear their stocks by throwing in a free Yugo with an Oldsmobile or a Cadillac.

"Of course, Yugo was never a BMW or a Cadillac, but I think most Americans did not know how to appreciate it," said Momcilo Spajic, a proud Serbian owner of a Yugo - one of the nearly 800,000 produced by the Zasava, or Flag, factory since 1980.

"This is driving in its most natural form. You feel every bump, squeak and jolt, and one can enjoy the sweet smell of gasoline and exhaust fumes," he said. "No car can replace it."

Although it was a flop in the U.S., Yugo enjoyed iconic status in the former Yugoslav republics - something like the Volkswagen beetle in West Germany or the Trabant in East Germany.

It was also exported to East European states, but not in the same numbers as to the U.S. mostly because Zastava could not meet huge domestic demand.

Zastava is finally stopping the production of Yugo because its new owners, Italy's Fiat, plans to start the assembly of its own compact, the Punto.

As Zastava's workers prepared to bid farewell to their greatest commercial success so far, they have attached a handwritten sign on the tailgate of the last Yugo on the production line.

Popular Jokes About The Yugo: