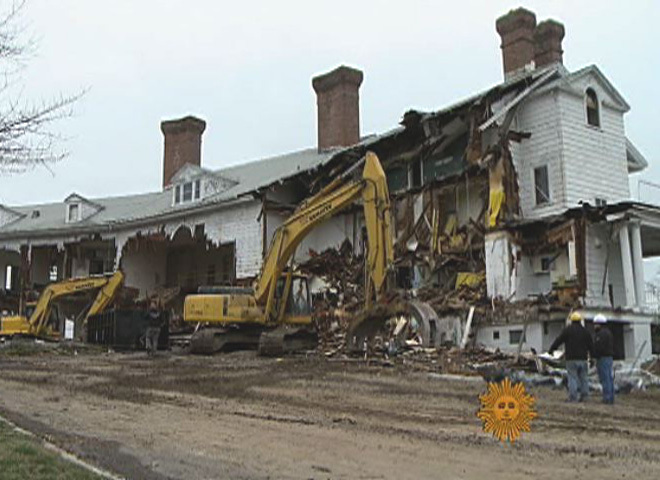 The popularity of F. Scott Fitzgerald's Jazz Era novel endures to this day. But as Serena Altschul tells us, the same cannot be said for a glamorous house that may have inspired it:

Just yesterday morning on the North Shore of Long Island, New York, a magnificent old home was knocked to the ground.

Yet this is not your ordinary teardown. This is a house with a storied past ...

"The lawn started at the beach and ran toward the front door for a quarter of a mile jumping over sundials and brick walks and burning gardens."

You can almost hear the echoes of better days so beautifully captured in what many consider the Great American Novel: F. Scott Fitzgerald's "The Great Gatsby."

Lore has it that this house - called Lands End - fired Fitzgerald's imagination.

"It's exciting; people in town think it's exciting," said its owner, real estate developer Bert Brodsky. "They come by boat. They look at the house. They say, 'This is the 'Great Gatsby' house."

Built by a newspaper editor in 1902, the 21,000 square-foot house in the village of Sands Point hosted the likes of Winston Churchill and Albert Einstein. It's said the grand parties caught Fitzgerald's attention.

"Just picture the moon out, the band playing, all the people dancing and mingling," said Brodsky. "It's almost like not real. It's almost like a fantasy land. Like you read about it and say, 'No, nobody could really live like this.'"

Brodsky and his son, David, bought the property seven years ago, but the upkeep on the $18 million house proved too costly. It's been completely condemned.

As Altschul walked through, she remarked, "You can almost smell the days gone by."

The home was one of the few remaining relics harkening back to Fitzgerald's time on Long Island during the Roaring '20s.

Ruth Prigozy, the executive director of the F. Scott Fitzgerald Society, calls "Gatsby" the novel of its time.

She says no place symbolized the Roaring '20s better than what was known as the Gold Coast of Long Island, with its elegant estates, like the Guggenheims' Hempstead House, now a museum.

It was that grandeur that drew a young F. Scott Fitzgerald and his southern belle wife, Zelda, to the area in 1922. He was in his 20s when he wrote "Gatsby."

As seen in the 1974 film starring Robert Redford, the novel tells the story of a Wall Street trader named Nick Carraway, who rents a summer cottage next to the mysterious Jay Gatsby, who's famous for his lavish parties.

"The bar is in full swing, and floating rounds of cocktails permeate the garden outside until the air is alive with chatter, and laughter, and casual innuendo and introductions forgotten on the spot."

"If you read one of the party scenes in 'The Great Gatsby,' it is a compression of everything that's going on at time," said Prigozy, "a mirror of everything and everyone at that time."

At twilight, Fitzgerald would sit on a porch in Great Neck, gazing across the bay with writer Ring Lardner, towards Lands End, imagining the grand parties.

Fitzgerald left Long Island before "The Great Gatsby" was published in 1925.

"It's so perfectly written, there isn't one sentence that you could take out," said Prizogy.

F. Scott Fitzgerald died in 1940 at age 44. But his memory remains on the Gold Coast of Long Island, even as the landmarks that got "Gatsby Country" continue to disappear.

Despite protests from historical groups, Bert Brodsky says they had no choice but to tear down the dilapidated house.

They plan to build five homes on the property in a community called Seagate at Sands Point.

"Are you sad about this?" asked Altschul.

He says they're respectful of days gone by - and the book that still takes us there.

"So we beat on, boats against the current, born back ceaselessly into the past."

Lionel Richie on his "amazing ride"
Thanks for reading CBS NEWS.
Create your free account or log in
for more features.
View CBS News In
CBS News App Open
Chrome Safari Continue
Be the first to know
Get browser notifications for breaking news, live events, and exclusive reporting.