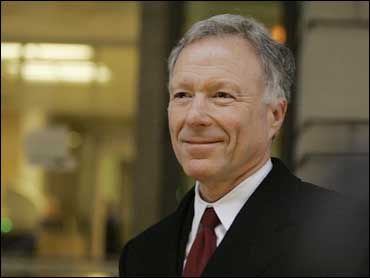 In the end, it was not exactly a rout, not quite the kind of one-sided whuppin' this White House once inflicted upon its enemies, real and perceived. In the end, and after a protracted struggle inside the jury room, the dry elements of the law trumped the slick elements of style. In the end, 11 ordinary people declared from the jury box that there is indeed such a thing as too much spin, even from sleazy political operatives, and that the law still stands as both sword and shield against the arrogant who use power to keep and extend power.

The predictable conviction of I. Lewis "Scooter" Libby on federal perjury, false statement, and obstruction of justice charges brings to an end an ugly chapter in the life of the Bush administration. Unless he gets relief from the appeals courts, or is pardoned in January 2009 by outgoing President Bush, Libby now faces prison time for being too cute by half when questioned under oath by federal investigators and prosecutors about his role in the Valerie Plame Wilson affair. And Libby has no one to blame but himself for this dramatic turn in his heretofore shiny, happy life.

He could have simply said he did not remember when he first heard of Plame Wilson. He could have said that he wasn't sure. He could have simply told the truth — or at least what the evidence at trial suggests was the truth — and given prosecutors and investigators the same timeline that other witnesses ultimately would give. Hell, he could have even chosen to exercise his right to remain silent and forced special prosecutor Patrick Fitzgerald to wrangle the information out of him. Libby chose none of these paths. He chose the Martha Stewart approach — play games with the feds and figure you will outsmart them, and the law, in the end.

But it didn't work for Martha (five months in prison and five months of home detention) and it didn't work for Scooter. Even if jurors had become sympathetic to him during the trial — an unlikely scenario, especially after he decided not to testify in his own behalf — they hardly had any evidence upon which they could have acquitted him. Forced with a choice between believing the handful of prosecution witnesses who painted Libby as a conniving liar and Libby's lone good witness — his successor, John Hannah, who told the panel that Libby indeed had a bad memory, the panel quite reasonably chose the former. It wasn't political — it was strictly business.

Libby supporters will point to some of the dramatic rulings made before and during the trial by U.S. District Judge Reggie Walton and proclaim that their guy will ultimately be redeemed by the more conservative federal appeals court. It is possible. Indeed, part of the defense strategy was to sandbag its own case in the hopes that by doing so better appeals issues would be raised. But this is a terribly tricky strategy, given how rarely trial judges are overturned on appeal. I would be surprised if Libby gains any relief at the appellate court level, even though some of his political allies sit on the bench at the D.C. Circuit Court of Appeals.

Unfortunately, aside from its result, the trial really didn't tell us much more than we already knew about this sordid story. Officials at the highest levels of this White House, the evidence showed, went after former ambassador Joseph Wilson because he had come out against the administration's war policy in Iraq. And they did so not only by challenging his opinions in the public marketplace, where the fight might have been fair, but by secretly and with malice aforethought outing his wife as a covert CIA agent. It was a dirty business that was uncovered long before the gavel came down to begin the Libby proceedings.

But Libby wasn't the only person guilty of this crime of conscience and responsibility. His boss, Vice President Dick Cheney, also was guilty of it. And so were many other administration officials who peddled information to their willing and eager co-conspirators in the media. You can argue that this White House did to Joe Wilson, or tried to do to Joe Wilson, what countless other White Houses have tried in the past to do to their political enemies. But that makes this odious conduct no less foul. Even when we don't agree with our public servants, we have a right to expect them to play fair, and these didn't, the evidence showed, not by a long shot.

There are a lot of lessons from the case of United States v. Libby — too many to chronicle here. My favorite lesson, however, and the one that will stick with me as this story inevitably winds down, is how a basic legal principle — thou shalt not lie under oath — trumped a basic political principle — thou shalt do anything to destroy thine enemies. In this case, the White House lost credibility, the vice president lost prestige and respect, Libby lost his job, and probably his liberty, and countless other government officials lost whatever sense of integrity and honor they may have felt when they started their jobs.

I never was big on comparing this scandal to the Watergate scandal. That one changed history. This one merely changed lives and perceptions. But the storyline is the same: When you seek to do ill to others through underhanded means, you often get caught and usually get punished. My guess is that Libby will have plenty of time to think about that in the minimum-security prison he'll likely call home for a while.