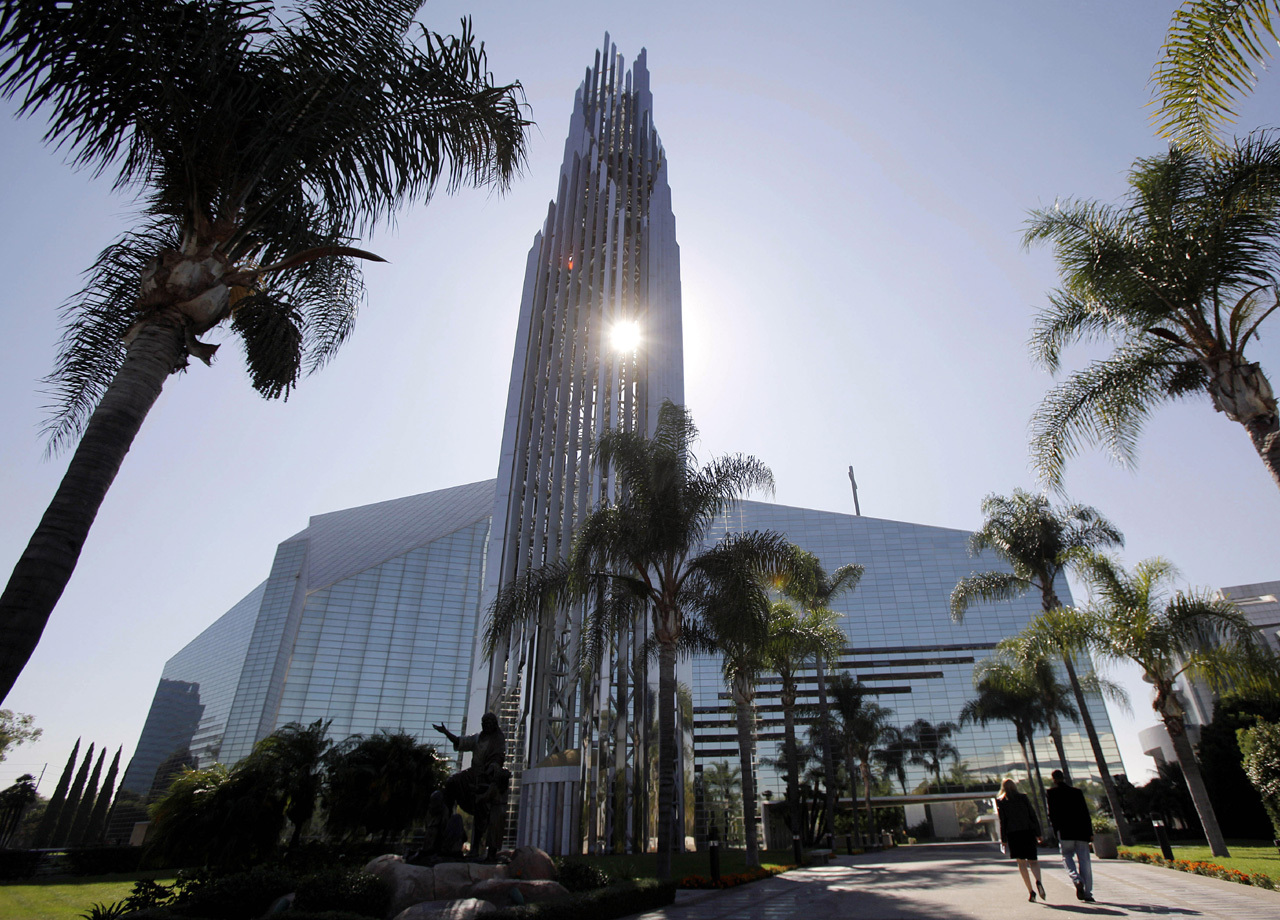 The Crystal Cathedral has been a California landmark for more than 30 years. Now it's the symbol of a landmark feud - its founding family is out, and the building will become a Catholic Church. Brian Rooney reports:

The Cathedral was designed to give its congregation a window on God ... its construction, the vision of one man.

But this morning the Cathedral is missing the voice of its founder Robert Schuller and the entire family that made it a church of the world.

Here, Robert Schuller preached a new Christian positivity with a beatific smile. He said, "If you can dream it, you can do it."

His dream began in a drive-in theater, where sometimes he went car to car and became the Cathedral.

He was one of the first to preach from the electronic pulpit of television. His ministry at its peak reached 20 million people around the globe with his weekly television broadcast,"Hour of Power."

Schuller parted the waters for many religious broadcasters who followed.

But today the ministry returns to its roots with a sermon to be delivered in a movie theater by his daughter, Sheila Schuller Coleman.

"We're starting over in a movie theater," she said.

They will not be staging the extravagant holiday pageants they once held in the days of the Cathedral's glory. Coleman and the extended Schuller family have either resigned or been fired from the church her father started.

The Cathedral's aging congregation dwindled, the recession hit, and income dropped by a third. They went bankrupt - their problems as earthly as the average homeowner's.

"We were living in a house we couldn't afford anymore, and it became more and more difficult to afford the mortgage," said Coleman.

But it wasn't just any house. Designed by the famed Philip Johnson, it was both enormous, and enormously expensive to maintain and operate.

When asked if they had gone "too big," Coleman replied, "I don't think so. I think I'd rather grow too big and implode than not try to reach all those people."

But it all devolved into lawsuits, and Robert Schuller's son is estranged from his sisters. Last Sunday Sheila Coleman was the last Schuller to deliver a sermon in the family's glass house of God.

She's going to the Internet.

"The youth are not going to be looking at television that much," she said, "but you can get a message and put it on the web, and I think that's the future."

"What might have been the golden age of televangelism, you think, is passing?" Rooney asked.

"I wouldn't stake my money on it for much longer, no," she replied.

With no income, Coleman is selling her home.

Her father announced on the Internet that he's broke: "It's been a humbling experience for this dreamer who never quits," he said.

The message about how the mighty can fall is not lost on the House of Schuller.

When asked if she looks upon it as God testing her, Coleman said, "Absolutely I look at this religiously, and the Bible is full of one comeback story on another. My Dad has taught me one comeback story after another. And Dad even said, 'A setback is a setup for a comeback,' and that's where we are."

How NYC doctors worked on the frontlines of COVID

The Great Reshuffling: How the real estate market exploded
Thanks for reading CBS NEWS.
Create your free account or log in
for more features.
View CBS News In
CBS News App Open
Chrome Safari Continue
Be the first to know
Get browser notifications for breaking news, live events, and exclusive reporting.