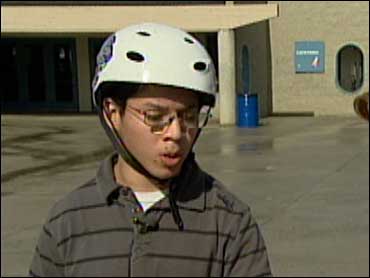 It's a typical teenager's morning routine.

But R. J. Feild, a sophomore in Riverside County, is anything but a typical teenager, CBS News correspondent Sandra Hughes reports.

Everything about school is a struggle for R.J. He can barely read because his vision is so terrible. Only one hand works well. And walking is a major ordeal.

When he make new friends, do they ask him: "were you born like this?"

"Yea, which I'm fine with it. It's part of life. Like all my other struggles," he said.

What does he tell them?

"I tell them that my mom did drugs and she made me have to be born this way," R.J. said.

He was born addicted to heroin, with meth, alcohol and cocaine also in his system. Months premature, he weighed only two pounds. His birth mother, who was on public assistance, abandoned him in the hospital. No one expected him to survive.

But then again, surprising folks is what R.J. does best.

Now 16 years old, he just won an essay contest sponsored by California legislator John Benoit, called, "There ought to be a law."

Part of his essay reads, "For my entire life I will need assistance...."

What R.J. is proposing: