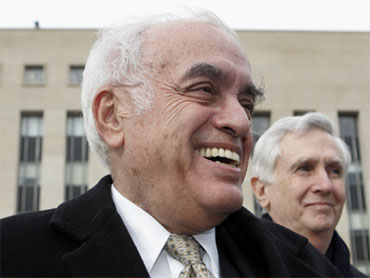 John Nichols writes about politics for The Nation magazine as its Washington correspondent.

Robert Novak was uncharacteristically self-deprecating in his assessment of the long-term influence his half-century of journalistic endeavor would have on the American conversation.

"Nobody will remember my newspaper columns or television appearances," Novak said. "They won't remember me for my writing. How many people remember Walter Lippmann?"

In fact, a good many Americans remember Lippmann, whose writing with regard to the "manufacture of consent" by powerful interests and a subservient press provided not just the title but an intellectual frame for one of the most influential media critiques of the twentieth century, Manufacturing Consent, by Noam Chomsky and Ed Herman.

Lippmann was a savvy social critic, who recognized decades before the political right turned its affections toward Sarah Palin that "Brains, you know, are suspect in the Republican Party."

Lippmann was, as well, a wise critic of military adventurism, condemning the excesses of the cold war and warning Lyndon Johnson that Vietnam was a quagmire waiting to happen.

Said Lippmann with regard to those who called constantly for military interventions in distant lands: "The time has come to stop beating our heads against stone walls under the illusion that we have been appointed policeman to the human race."

Though they were poles apart ideologically, that last line from Lippmann was one with which Novak heartily agreed.

That fact reminds us that Novak, like any great journalist, leaves a complicated legacy that is worthy of memory--even if it is not always worthy of praise.

Much will be written and said about Novak in these days after his death at age 78. His foibles will be recalled, especially his troublesome role in the whole Valerie Plame affair. Even if he never quite recognized why his intriguing with Dick Cheney's henchmen raised so many hackles, Novak understood--with considerable sadness--that the Plame story would "forever be part of my public identity."

Some of us also recall--and have a hard time forgiving--Novak's role in what Saul Landau correctly described as the "organized right wing attack" on the memory of murdered Chilean diplomat and dissident Orlando Letelier.

But Novak believed, with some validity, that there was more to his legacy than the "prince of darkness" image he died with.

Observers of the "great game" of politics will note, as did American Conservative Union chair David Keene on Tuesday, the defining role that the writing of Novak and Rowland Evans--with their widely syndicated "Inside Report" column--played in the development of modern conservative thinking and the transformation of the Republican Party. Keene's correct when he says that Novak and Evans "gave respectability and visibility to conservative ideas and positions in the 1970s, when they were mostly dismissed."

Despite Novak's dismissals, the can be no doubt that historians and conservative thinkers will remember him for his writing--especially about the rise of Barry Goldwater and Ronald Reagan.

The important thing to recall about Novak is that, at his best, he was an ideological rather than a partisan journalist. (A friend of Lyndon Johnson, the journalist was reportedly a registered Democrat until the day he died.) Novak would eventually declare himself to be a "right-wing ideologue." But his columns and comments were often as rough on the Republican establishment as they were on the Democrats.

Novak sojourned in Republican circles, but he tended to think (and probe) harder and deeper than most of the partisans who today pass for conservative journalists. Novak loved politics and policy fights, and covered both with an eye toward detail--and a determination to stir things up--that for many years made his columns required reading. As a young journalist, I spent a good deal of time "talking races" with him--handicapping contests for Congress, governorships and even local offices. Electioneering was our shared passion, although we also talked policy now and again--amusing ourselves when we agreed across ideological lines, as we did in our shared opposition to Republican and Democratic warmaking in the Middle East and southern Asia.

In the days before Novak became an unlikely cable television phenomenon, we passed many an hour weighing the merits of presidents and policies in the press stands at national conventions and political gatherings. Novak always had time to gossip with fellow political reporters, whose company he certainly seemed to prefer to that of politicos.

Even those of us who were unsettled by his coziness with some of the creepier players in the past administration--especially after he helped to reveal the identity of CIA operative Plame as part of a thuggish move by Vice President Dick Cheney's cabal to blunt criticism from Ambassador Joe Wilson--recognized the delight that Novak took in covering politics and in breaking stories.

Some of us also recognized that, like Walter Lippmann, Novak maintained a healthy, and very American, disdain for military adventurism.

Novak objected to both George H.W. Bush's Persian Gulf War and to George W. Bush's Iraq invasion and occupation. He also argued for a "balanced" US approach to the conflict between Israel and Palestine. Indeed, while Novak was arguably harder on Jimmy Carter than he was on any other president, the journalist would in 2007 hail Carter, who, Novak wrote, "repeatedly and unequivocally states what Palestinian and Israeli peace advocates view as undeniable: To achieve Israeli-Palestinian peace with all its benefits for the world, Israel must end its illegal and oppressive occupation of the West Bank."

Breaking with most conservatives and virtually all Republicans, Novak argued that "the former president's clarity on the Palestinian question contrasts sharply with the refusal by George W. Bush to face harsh reality that casts a pall over hopes to conclude his presidency with a diplomatic triumph."

Robert Novak wrote these generous words about a Democratic politician with whom he had often disagreed in one of his last columns. This leap across ideological, partisan and personal boundaries is a part of Novak's important, infuriating and profoundly complex journalistic legacy. This is why his legacy will continue to be debated for a good deal longer than Novak himself imagined.

By John Nichols:
Reprinted with permission from The Nation