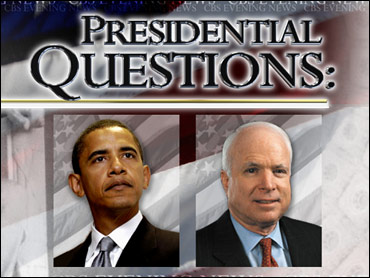 In November, Americans decide whether Barack Obama or John McCain becomes the 44th President of the United States. In the series "Presidential Questions," CBS News anchor Katie Couric asks questions that move the candidates well beyond the usual sound-bites. Some questions concern policy. Others are more personal. All will give you a better sense of who these men are - and what has shaped them. What follows is Couric's question - and the candidates' full answers.

Couric: What is your favorite movie of all time?

McCain: "Viva Zapata." It's a movie made by Elia Kazan. It was one of the trilogy of "A Streetcar Named Desire," and "On the Waterfront" and "Viva Zapata." Marlon Brando stars in it. He plays Zapata. It's a heroic tale of a person who sacrificed everything for what he believed in and there's some of the most moving scenes in that movie that I've ever seen. And one of them is he gets married. The night of his wedding night he gets up, and he and Jean Peters are in their hotel room, this little room, and she says "what's the matter?" And he says, "I gotta go to Mexico City tomorrow. I've gotta be with Poncho Villa and Modero and these people." He says "I can't read." And she reaches over and takes the bible from the table and opens it up and starts, "In the beginning." It's a great scene. It's great and there's many others that are wonderful too, especially when he dies - when he gives everything for his country and what he believes in.

Obama: Oh, I think it would have to be "The Godfather." One and Two. Three not so much. That saga - I love that movie.

Couric Do you have a favorite scene?

Obama: You know, so many of them. I think my favorite has to be, the opening scene of the first "Godfather" where, where the caretaker comes in and, you know, Marlon Brando is sitting there and he's saying "you disrespected me." You know "and now you want a favor." It sets the tone for the whole movie. Now there …

Obama: Yeah, right. I mean there's this combination of old world gentility and ritual, with this savagery underneath. It's all about family. So it's a great movie. "Lawrence of Arabia." Great film. One of my favorites - and then "Casablanca." Who doesn't like "Casablanca?"

Couric I asked for one!

Obama: I'm a movie guy. I can rattle off a bunch of movies. But that "Casablanca," you know.

Girls with alopecia taught each other to be comfortable being themselves

"She was tortured": Mahsa Amini's family speaks out amid Iran protests
Thanks for reading CBS NEWS.
Create your free account or log in
for more features.
View CBS News In
CBS News App Open
Chrome Safari Continue
Be the first to know
Get browser notifications for breaking news, live events, and exclusive reporting.