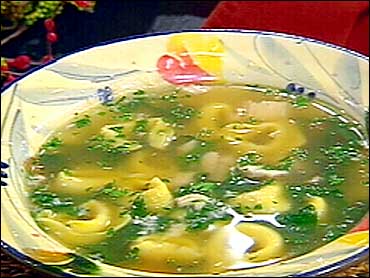 On a cold night, a steaming bowl of soup can really hit the spot. Plus, soup is relatively cheap, healthy and easy to prepare.

So it's no surprise that it's the top ready-to-serve dish ladled up at dinnertime. The only problem may be deciding which soup to buy.

To prepare for this test, trained tasters spent weeks trying homemade soups and soups from top restaurants so they would be able to identify what makes a good soup. While "secret shoppers" from all over the United States visited grocery stores, purchased soups off the shelves, and sent them to the Consumer Reports office.

The final collection of 31 soups represented the variety of available types: ready-to-serve, condensed, dry and frozen. Soups were sampled in three of the top-selling flavors: vegetable/minestrone, chicken noodle and New England clam chowder.

Tasters were looking for soups with the best flavor and texture. They tried each of these 31 products three different times before determining their ratings.

Canned, dried and jarred soups varied widely in quality. In general, frozen soups were "a bit more consistent," says the magazine. Frozen soups can taste fresher than other varieties because they require minimal heat treatment before freezing and packaging.

Canned and jarred soups, on the other hand, require a lot of heat to process. This tends to soften veggies, causing them to lose their flavor and color. The dehydration process often results in tough meat. So, overall, frozen soups seemed to be a good bet.

Here are the winners in this category, along with comments from tasters.

Tasters discovered big differences within brands. For instance, a Campbell's soup earned the only "excellent" rating, but some other Campbell's soups rated much lower.

Here are the top winners in this category:

Unfortunately for clam chowder lovers, testers only found one highly rated soup in this category.

Testers' other complaint about this soup is its high fat and calorie content. Clam chowders do tend to be higher in both areas because they usually contain cream or milk.

The other health concern most people have with prepared soups is their high sodium content. However, soup doesn't have to be loaded with salt to taste good - Consumer Reports found two highly-rated soups that were low in sodium.

Consumers concerned about the nutritional values of their soups should know a few things about soup labels.

Consumer Reports explains: "Soups labeled 'low fat,' for example, contain 3 grams of fat or less per serving, but they aren't necessarily lower in fat than other soups.

"Knorr TasteBreaks chicken noodle is labeled 'low fat' and has 2 grams per serving, but most of its competitors have even less fat - they just don't boast about it. Healthful-sounding Progresso 99% Fat Free Chicken Noodle has a mere half-gram less fat per serving than regular Progresso Chicken Noodle.

"To use the word 'healthy,' a food must meet several requirements, including limits on sodium and fat. Since most soups are already low in fat, the label often simply helps you identify soups that are lower in sodium than others."