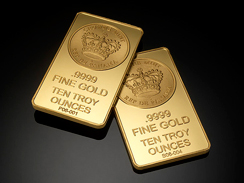 (MoneyWatch) Since 2002, gold has experienced a meteoric rise, increasing from about $280 an ounce to about $1,600. A recent Gallup poll found that roughly 30 percent of respondents considered gold to be the best long-term investment, making the metal a more popular investment than real estate, stocks, and bonds.

Duke University professor Campbell Harvey and co-author Claude Erb have examined a number of "popular stories" to better understand the role of gold in asset allocation. Among the justifications for owning gold they covered where inflation hedging, currency hedging, disaster protection, and demand from emerging market countries. They also examined the role of supply and demand and found what could be considered an anomaly -- the new supply of gold that comes onto the market each year hasn't substantially increased over the past decade even though the price of gold has risen fivefold.

The following is a summary of their findings:

Gold as an inflation hedge

Despite the widely held belief that gold is an inflation hedge, gold has historically been a poor hedge against higher prices in the short or intermediate run. For example, the price of gold hit $850 per ounce on January 21, 1980. By March 19, 2002, gold had fallen to $293 per ounce. Note that the inflation rate for the period 1980-2001 was 3.9 percent per year. So the loss in real purchasing power was about 85 percent.

Harvey and Erb went on to observe:

They go on to note:

And you already saw what happened then. If the real price ratio of gold mean reverts over the coming decade to its historical average of about 3.2, the real returns would be abysmal.

Gold as a currency hedge

If this is true, gold should be stable when other asset markets falter. However, we see gold fell in nearly one-sixth of months when stock prices fell. If gold was a true safe haven, then we would expect very few, if any, such observations.

Bottom line: Gold may not be a reliable safe haven asset during periods of financial market stress.

Both production and supply of scrap gold are insensitive to the price of gold. The increased demand for gold has been a result of the impact of momentum-based investors. The result has been that today a single exchange traded fund (SPDR Gold Trust, GLD) holds more gold than the official reserves of China.

Momentum is a well-known factor in returns. However, it's a short-term phenomenon. In the long term, prices/valuations originally driven by momentum-fueled bubbles tend to revert to the mean. Things that can't go on forever eventually stop. And it's important to remember that momentum works both on the upside as well as the downside.

In summary, the authors concluded:

Investors tend to search for or interpret information to confirm their own views and ignore information that contradicts those views. Erb and Harvey present enough evidence to support either side of the debate about whether you should consider including an allocation to gold in your portfolio. At least now you can make a more informed decision.