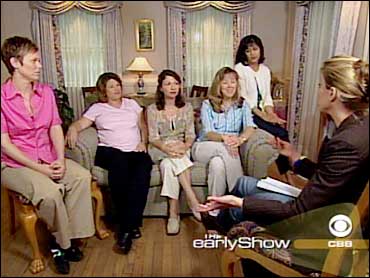 More and more women are dropping out of their careers, at least temporarily, to stay home and raise their children.

In part two of The Early Show series about moms and stress, CBS News correspondent Tracy Smith reports on how moms are managing life at home with the kids.

Over-scheduled, over-tired, desperately trying to catch up, stay-at-home motherhood is a challenge that makes a 9-to-5 job look like child's play.

For Jen Singer and her crew of stay-at-home moms, "Desperate Housewife" Lynette Scavo is a national hero.

"Lynette is crazed," Singer says, "And she's trying to get everyone together. And the kids don't behave. That's how we feel all the time, just scattered like that."

Stay-at-home motherhood has a nice ring to it, but for many, it's 100 hours a week of barely concealed chaos.

Singer, former advertising executive, now focuses on her toughest clients: Christopher, 6, and Nicholas, 8, and their friends.

Singer says, "The biggest stresses of stay-at-home motherhood include that it just doesn't end. It's relentless, and you clean the floor, and then it's dirty again. You put the laundry away, and then you have to do it over again. And you never think you're doing it well enough."

Asked if there are moments when she feels like she has hit her breaking point, Singer says, "Oh, every day," and laughs.

Motherhood, however joyous, has always been a test of nerves and patience. But in recent polls, moms say they are more stressed out than their parents.

"There's a kind of stress that is new and typical to this generation," says Judith Warner. The mother of two is the author of "Perfect Madness: Motherhood in the Age of Anxiety."

Warner says, "The demands placed on mothers, in terms of level of performance, are greater than ever before. The snack foods have to be exactly right. The play dates have to be with the right kids. The message from the culture is that if you're a mother, you're a mother 24/7. You're entirely absorbed by it. You are defined by it."

Singer says since she has chosen this as her full-time job, she'd better do it well, sweating every detail.

She says, "Should I put them in hockey at 4? Because if not, they're going to miss the hockey boat by the time they're 6. And that one's been reading since he was 2. And oh my God, maybe I'm not doing enough. My 2-year-olds are not reading!"

So how to bring life back into perspective? Singer finds some refuge in her own Web site, and a unique form of creative expression: The Momma-Log.

Singer says, "I can share in a funny way, the things that hurt, are hurting us deep down. I mean, humor lets me get away with saying a lot of things that you normally can't say."

Women often find relief talking to other women; in fact, science backs that up.

"Contact with friends is a great stress buster," says Shelley Taylor. Through her at studies at UCLA, she found that time spent with women friends provides a biological boost via the stress-busting hormone oxytocin.

Taylor explains, "It reduces heart rate, blood pressure and the stress hormone cortisone. When women go out with their friends for an evening, they can feel the effects physiologically for quite some time afterward."

A mother named Janet says, "I feel like it's more comforting to talk to one of my girlfriends than my husband, because my husband doesn't understand what I go through. My girlfriends do."

The juice-box life of SpongeBob and Legos can get tedious. But experienced moms will tell you it does get easier.

A mother named Meredith says, "As I'm having my third child, I'm starting to let a lot more things go. I'm not so time-sensitive as I was when I just had one or just had the two."

And life, she says, is really not falling apart.

Despite all, 80 percent of moms say they are satisfied with the choices they've made.

If Singer could go back into advertising, would she do it?

"Absolutely not," she says. "There's just nothing like hanging out with your kids on a Tuesday afternoon in the sun."

Despite all the stress?

Singer says, "As long as they're not whacking each other over the head, yeah."

Tip: The stay-at-home moms Smith spoke to line up child-care a few hours a week to run errands, or take care of the house, or just go out to lunch with friends. This was a big stress buster.