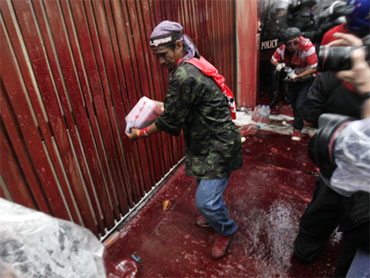 Red-shirted protesters hurled plastic bags filled with their own blood into the residential compound of Thailand's prime minister Wednesday, hoping their shock tactics will bring down his government.

Several thousand later gathered in front of the U.S. Embassy, saying they wanted to tell the international community that their government was illegitimate. A protest leader, Jatuporn Prompan, went into the embassy compound, where he said he talked with U.S. diplomats.

Riot police first blocked all approaches to Prime Minister Abhisit Vejjajiva's walled compound. But after negotiations, three dozen demonstrators were allowed to squeeze through the police cordon carrying about six 1.3-gallon plastic jugs filled with frothy blood over their heads.

They splattered blood across Abhisit's front gate and poured some of it into plastic bags that they hurled at the home, leaving the walls, roof and grounds smeared with red.

A heavy afternoon downpour ended as the blood spilling finished, leaving dark red puddles in the street that a white-suited medical cleanup team quickly hosed away. Some climbed on the prime minister's tile roof to remove the empty, blood-soaked bags.

The incident in the Sukhumvit Road area, home to many wealthy Thais and expatriates, followed similar "blood sacrifices" Tuesday at Abhisit's office and the headquarters of his Democrat Party. The dramatic acts grabbed attention, but put the "Red Shirt" protest movement no closer to its goal of forcing new elections.

The protesters' march to Abhisit's house and police cordons, thrown up after the government invoked an emergency decree, halted traffic in one direction on Sukhumvit Road, a major thoroughfare, paralyzing parts of the neighborhood. Restaurants closed their doors and residents of luxury condos were prevented from driving out of the area.

"We heard they were coming so I stayed in. Sure enough we're blocked in now," said John Bujnosh, 59, a Texas oil driller who lives on the same street as Abhisit.

Many residents watched from their balconies or wandered into the street to take pictures. Most anti-government protests in the past have been confined to Bangkok's government district several miles (kilometers) away.

Despite some tension, the protest was festive. Thai country music blared from speakers on the protesters' pickup trucks and the red-shirted demonstrators waved and smiled to residents - as did riot police.

"A group of police stopped us," said Swedish tourist Elouise Johansson. "I thought, oh no, I don't have my passport with me. But they just wanted to take pictures with us." She displayed pictures of herself holding a riot shield beside smiling helmeted officers.

Abhisit himself has been sleeping at an army headquarters and taking trips out of the city since preliminary protests began Friday.

More than 100,000 demonstrators, including many from the poor northeast and north, gathered in Bangkok on Sunday, vowing to continue their protest until victory. But Abhisit has rejected their demands to dissolve Parliament, saying only that he will listen to the protesters and leaving the situation in a stalemate.

The protesters consist of supporters of former Prime Minister Thaksin Shinawatra, who was ousted by a 2006 military coup for alleged corruption, and pro-democracy activists who opposed the army takeover. They believe Abhisit came to power illegitimately with the connivance of the military and other parts of the traditional ruling class.

Thaksin, who lives overseas to escape a two-year jail sentence for abuse of power, remains widely popular among the poor who are grateful for the cheap medical care, low-interest loans and other measures his government enacted to reduce poverty.

On Tuesday, thousands of Red Shirts formed long lines to have their blood drawn by nurses to spill at Government House, the prime minister's office. Leaders claimed to have collected 80 gallons (300,000 cubic centimeters). Hundreds of protesters then traveled to the nearby ruling Democrat Party headquarters and splashed several more jugs of blood on the pavement outside.

Surat Horachaikul, a political scientist at Bangkok's Chulalongkorn University, said he believed the protest organizers lacked plans for their next step and that the protests might end in a few days.

"If nothing comes out of this rally, the government is likely going to become more stable," he said.

Despite continued anxiety over possible violence, the Stock Exchange of Thailand and Thai baht currency have remained stable.

Many Bangkok residents say they are tired of the years of turmoil that have hurt the economy.

"I want the protest to stop as soon as possible. My business would be better, I hope," said Suwan Pana-ngham, a downtown food vendor.

But other residents cheered the protesters as they approached Abhisit's house.

"These people represent the majority of Thais," said Chavalita Nittayasomboon, a 29-year-old company employee. "They might not be educated, but they have their dreams of having a better quality of life."