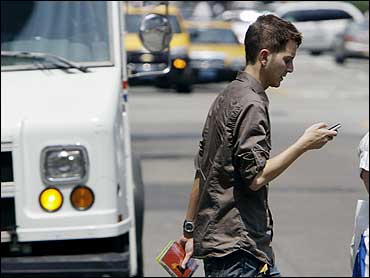 American cell phone users are sending more text messages than they are making phone calls, according to a Nielsen Mobile survey released Monday.

For the second quarter of 2008, U.S. mobile subscribers sent and received on average 357 text messages per month, compared with making and receiving 204 phone calls a month, according to Nielsen. The new statistic is a clear indication that Americans have jumped onto the SMS text bandwagon.

In the first quarter of 2006, Americans sent and received 65 text messages per month. The number of messages sent and received today has increased 450 percent. But even though people are texting more, it doesn't mean that they've stopped talking on the phone. According to Nielsen, the number of phone calls that people make and receive each month has remained relatively flat over the past two years.

The wireless industry's trade association, CTIA, recently noted the explosion in texting in its own report. It recently reported that for the month of June, American cell phone subscribers sent about 75 billion SMS text messages, averaging about 2.5 billion messages per day. This represents an increase of 160 percent over the 28.8 billion messages reported in June 2007.

Short Message Service, or SMS, text messaging first became popular in Europe and Asia, because it was much cheaper to send short text messages than make an actual phone call. In countries such as the Philippines, the cost of sending one text is less than a penny. And in Europe where cell phone users are still penalized with high roaming charges between countries, texting is still a more economical form of communication.

But in the U.S. texting is proving to be a cash cow for carriers. Over the past two years, the cost of sending and receiving individual text messages without a special text message package has gone up 100 percent with individual text messages costing 20 cents per message. Carriers are now offering unlimited cell phone texting plans that cost an additional $20 a month, which makes sending texts more affordable for heavy texters.

The surge in text messaging is being driven by teens 13 to 17 years old, who on average send and receive about 1,742 text messages a month. Teens also talk on the phone, but at a much lower rate, only making and receiving about 231 calls per month. The report even suggests that tweens or kids under the age of 12 are also heavy text users, averaging about 428 messages per month.