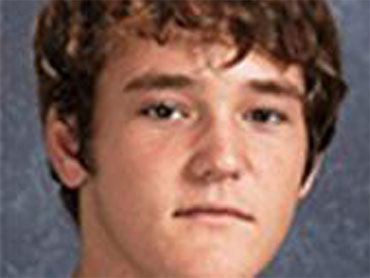 DEERFIELD BEACH, Fla. (CBS/AP) A 15-year-old Florida girl was left in critical condition after a teen boy allegedly punched her and stomped on her with his steel-toed boots.

Josie Lou Ratley, a student at a Florida middle school, was airlifted to Broward General Medical Center after 15-year-old Wayne Treacy allegedly beat her relentlessly on Wednesday. The attack was apparently triggered by a text message dispute between Ratley and the suspect.

A 13-year-old girl, who appears to be in a relationship with Treacy, was arrested as an accessory to the brutal beating. Broward County Sheriff Al Lamberti said the girl "knew he was going to do this, did nothing to stop him and, in fact, directed him to Josie, the victim, and pointed her out."

Lamberti said that the victim objected to the boy's relationship with the 13-year-old and said so during an exchange of text messages with him.

"Those messages went back and forth and one of the messages was a comment regarding the suicide of his brother. That's apparently what set him off," Lamberti said.

Authorities said Treacy rode his bike to the middle school and got the 13-year-old to help him find Ratley. A teacher had to pull Treacy off of Ratley.

Defense attorney Betsy Benson, who's representing the suspect, said his brother's suicide played a role in the incident.

"I think that what we are going to find out is that the impact of this had a lot to do with this situation," she said.

Treacy is currently being held at a juvenile detention center while prosecutors determine whether to charge him as an adult. He is charged with premeditated attempted murder. His court date is March 26.