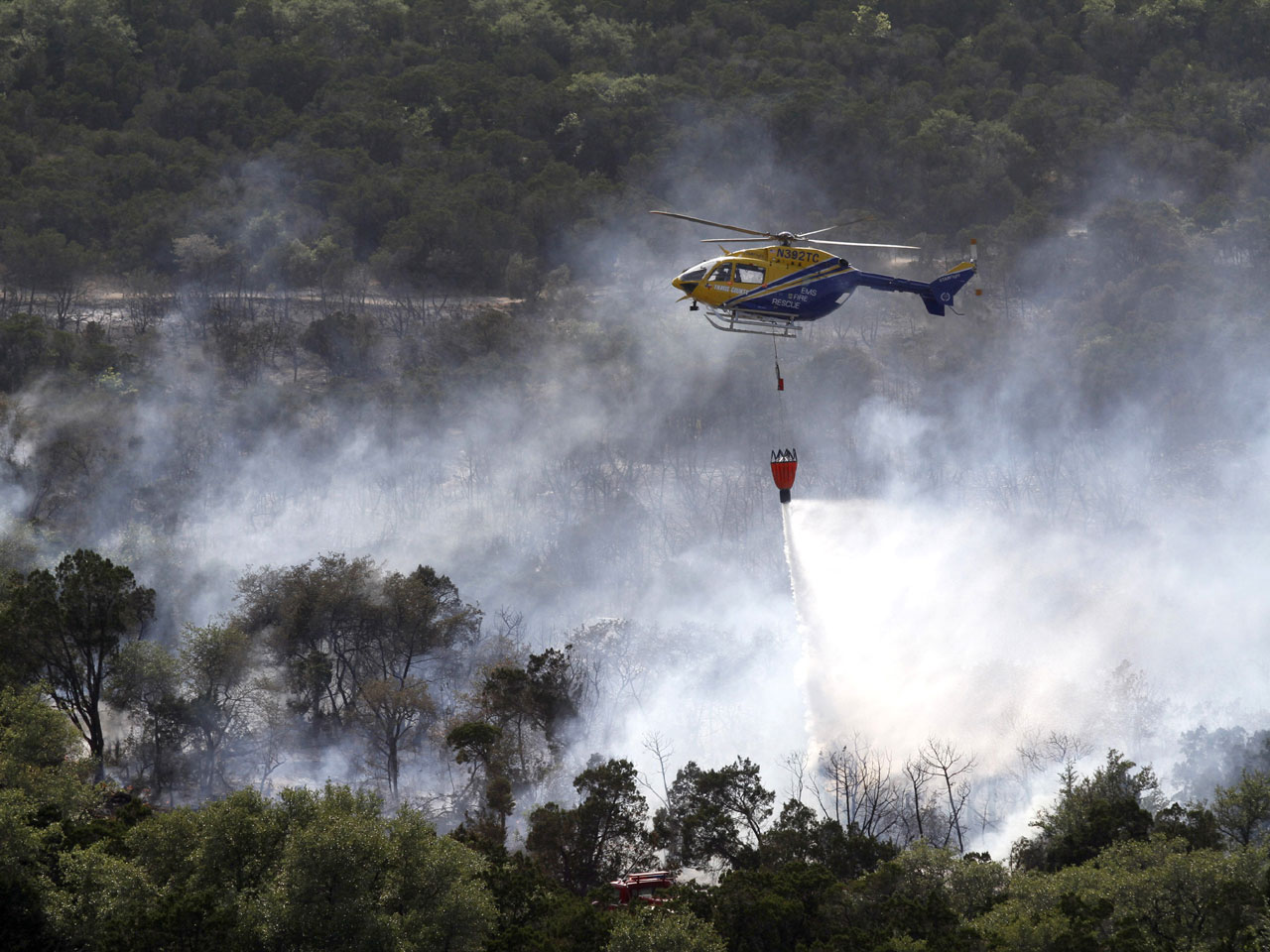 AUSTIN, Texas — Strong winds and tinder-dry conditions presented more challenges Sunday for firefighters battling a spate of wildfires threatening communities across Texas, including a blaze in Austin that destroyed several homes and prompted an aerial water attack in the capital city.

Late Sunday, a fire spokesman said that a homeless man charged with starting a fire that destroyed several Austin homes.

Meanwhile, the Texas Department of Public Safety disclosed that a volunteer firefighter who died Friday had been hit by a vehicle after fleeing a fire truck trapped in a wildfire-consumed pasture between Fort Worth and Abilene.

Eastland officials initially said the 50-year-old firefighter died after being overcome by smoke and falling into a ditch.

"Texas is reaching its capacity to respond to these emergencies and is in need of federal assistance," Perry said in a statement Sunday. "I urge President Obama to approve our request quickly."

Wildfires have spread across more than 700,000 acres — about the size of Rhode Island — in drought-stricken Texas. About half a dozen massive fires were still burning.

Calmer winds gave firefighters a chance to get a handle on a few massive fires Saturday, and some residents were able to return to their homes — or what was left of them. Winds intensified again Sunday to 20 to 25 mph from the south with gusts to 30 mph, giving new life to even some fires that had been declared fully contained, the Texas Forest Service said.

A complex of wildfires 70 to 80 miles west of Fort Worth around and south of Possum Kingdom Reservoir had burned about 32,000 acres and may have destroyed more than 50 homes as of Sunday evening, said Forest Service spokeswoman Victoria Koenig. Subdivisions in the area were evacuated Sunday, but the evacuation orders for the 70 residents of the Caddo community and the 750 who live in Strawn were lifted, said Palo Pinto County Judge David Nicklas.

A grass fire in southwestern Austin damaged at least 10 homes and put as many as 10 others in imminent threat Sunday. The fire burned 30 to 40 acres in the Oak Hill section of the capital city before state helicopters lifting large buckets filled from nearby lakes dropped water on burning grass and homes.

Two four-engine C-130 aircraft later joined the effort, and the once-dense column of black smoke had lessened significantly as the contained fire burned close to the ground. Nearby major roads were reopened.

Austin Mayor Lee Leffingwell said the fire was contained but not yet under control. Fire Chief Rhoda Kerr said the conditions are still extremely favorable for more fires to occur, because it's so dry and windy.

Many residents fled their homes — but not before turning on their lawn sprinklers.

Laurence Page stood on a street corner, trying to help police figure a way to reach and carry to safety his asthmatic elderly grandmother without endangering themselves.

Lindsey Senn fled her house after hearing neighbors banging on doors and shouting warnings. The 22-year-old said she looked out her door, saw smoke everywhere, grabbed her pets and left in her car.

"Am I going to come home to a house? ... A lot of thoughts are going through my head right now," Senn said.

Reinforcements rallied to keep a massive wildfire from sweeping into a small West Texas courthouse town about 30 miles north of San Angelo.

The threats eased in some areas. As humidity increased, a wildfire that had threatened the historic West Texas town of Cisco was almost fully contained Sunday.