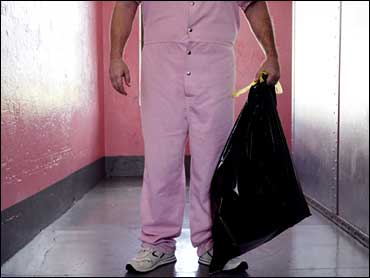 Three county inmates in the jail here lay on their bunks, not saying much.

They wore pink jumpsuits and pink slippers, and one was wrapped in pink sheets. They were surrounded by pink bars and pink walls.

They were not comfortable.

Despite the cramped condition of the tiny jail, the inmates said sitting there was better than working outside, where they might be seen by people they know. Using pink uniforms in a pink jail is a small step to deter inmates from ever wanting to spend more time in the Mason County Jail, which might be getting too old to operate, said Sheriff Clint Low.

"The county would have more inmate labor without them," said one inmate, who did not want to be identified. "I'm not going outside in these things. It's a good deterrent because I don't want to wear them anymore."

"You can make that two," another inmate said from a different cell.

"You can probably make it three or four," the inmate added.

Low bought the pink jumpsuits soon after taking office in 2005 and painted the jail pink about eight months ago. The jumpsuits are to keep inmates from coming back to jail, and the pink walls are designed to keep tempers and emotions cool in a jail that is tiny by today's standards.

Even if it helps a little, keeps just a few inmates from returning to the Mason County Jail, Low said, it's a success.

Mason County, with about 3,800 residents, is about 100 miles southeast of San Angelo. The jail is in Mason, the county seat.

Low got the idea of pink jumpsuits from a sheriff in Arizona, Joe Arpaio, who bought pink boxers to keep inmates from stealing the underwear and other clothing. In Mason, Low dyed the jumpsuits and slippers pink, and the color later bled to sheets, underwear and other articles during washings.

Low, who was a deputy in Mason before being elected sheriff, estimated the re-offense rate in the county is down 70 percent since he switched to pink jumpsuits for the inmates. He also said there have been no fights between inmates in the jail since it was painted.

"I wanted to stop re-offenders," Low said. "They don't want to wear them. Working inmates get a choice to work outside or sit inside, and some choose to sit inside because they don't want people to see them. They would rather stay upstairs."

The jail, built in 1894, is a historical site, and Low said he doesn't want to do anything to take away from its historical significance. In fact, it might be a better museum than a jail, he said.

So if another sheriff is elected, he or she can simply repaint the walls.

"It's just an easy step that will hopefully make some progress," Low said.

The Mason County Jail is clean and secure, he said. But it's also old, and it's tiny, Low said.

He believes the county needs a new jail, while some county officials have said the cost would simply be more than the rural county can afford.

The Mason County Jail is among the oldest working jails in the state. It has a capacity of five inmates — four males and a female — and, on Friday, was at capacity, with three more Mason inmates staying at the Comanche jail for $35 per inmate per day. Comanche is about 100 miles northeast of Mason.

Low doesn't know the size of the Mason jail floor, but said each cell is 18 square feet. There is also a walkway around the cells.

The Mason County Jail is operating under 17 variances of the Texas Commission on Jail Standards. That means it would not pass inspection under today's standards, but those variances allow the jail to stay operational.

Low believes the county needs a 36- to 45-bed facility. The county could use the beds it needs and lease the rest of the beds to other counties looking for space. That could defray some of the cost of the jail.

"At some point, the jail commission can come in and say this is wearing thin," Low said. "They could say we have had ample time to do something about it. My job is to protect the community. I can't look at profit and loss."

As a comparison, Menard County, just west of Mason County, has 2,300 residents, and its jail has a capacity for nine inmates. It was built in 1981.

Low estimates a new jail would cost between $6 million and $9 million.

Adan Munoz, executive director of the Texas Commission on Jail Standards, said variances are issued to antiquated jails such as Mason that were built well before state standards were created. He said all Texas jails are inspected at least once a year.

Mason County Judge Jerry Bearden said the county doesn't have the money for a new jail and he wants to continue operating the existing jail until jail standards say they can't. Mason County commissioners recently passed a roughly $2 million budget.

"And you don't want to build a jail for 10 people," he said. "So if you build it for 49 people, you have to hire nine more people to run it, and then there is more food and cost. It's a domino effect."

Mason, Menard and McCulloch county officials have talked about created a multi-county jail for all three counties to utilize. Talks have slowed of late because the three counties have expressed concerns about the cost, but Bearden said it's an option that is still available.

For now, Low and others hope small things such as giving inmates pink jumpsuits keeps them from coming back.

"That's not the Holiday Inn they are staying in up there," he said.