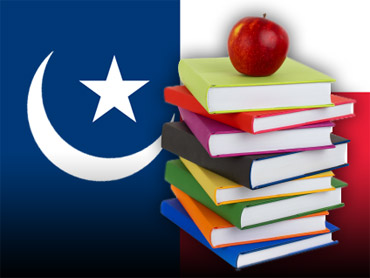 The Texas State Board of Education adopted a resolution Friday that seeks to curtail references to Islam in Texas textbooks, as social conservative board members warned of what they describe as a creeping Middle Eastern influence in the nation's publishing industry.

The board approved the one-page nonbinding resolution, which urges textbook publishers to limit what they print about Islam in world history books, by a 7-5 vote.

Critics say it's another example of the ideological board trying to politicize public education in the Lone Star State. Kathy Miller, president of the Texas Freedom Network, which advocates for religious freedom, questioned why the resolution came at a time when "anti-Muslim rhetoric in this country has reached fever pitch."

"It's hard not to conclude that the misleading claims in this resolution are either based on ignorance of what's in the textbooks or, on the other hand, are an example of fear-mongering and playing politics," Miller said.

Future boards that will choose the state's next generation of social studies texts will not be bound by the resolution.

"This is an expression of the board's opinion, so it does not have an affect on any particular textbook," said David Anderson, the general counsel for the Texas Education Agency, when asked by a board member what legal weight the resolution would carry.

"So this is a cosmetic exercise?" asked board member Mavis Knight, a Democrat from Dallas.

The resolution cites world history books no longer used in Texas schools that it says devoted more lines of text to Islamic beliefs and practices than Christian ones. Chairwoman Gail Lowe said the resolution cites old books because board rules prohibit them from discussing current books more than 90 days after their adoption.

"I believe that it's happening in the current (social studies books) even though we can't cover that in the resolution," said board member Terri Leo, a Republican from Spring. The resolution sends a "clear message to publishers that it should not happen in the future."

The resolution also claims "more such discriminatory treatment of religion may occur as Middle Easterners buy into the U.S. public school textbook oligopoly, as they are doing now."

Two Republicans broke from their party to vote with the Democrats. Two Democrats - Mary Helen Berlanga of Corpus Christi and Rene Nunez of El Paso - were absent for the vote. The initial vote on the resolution was 7-6, but the board later reconsidered the measure. The second vote was 7-5 after a Democratic board member left the meeting.

The measure was suggested to the board this summer by Odessa businessman Randy Rives, who lost his Republican primary bid for a seat on the panel earlier this year. Members of a social conservative bloc of the board then asked Lowe to put the resolution on this week's agenda.

During public testimony, which included comments from activists as well as a handful of parents, Jonathan Saenz, a lobbyist for the conservative Liberty Institute, argued that the board was "doing the right thing ... to prevent any type of religious discrimination or treat any religion in a way that's incomplete."

"The Board's mission, and Texas' future, is ill-served when the board chooses to use its limited meeting time to discuss and vote on discriminatory and politically motivated measures, such as this proposed resolution," said Frank Knaack, of the American Civil Liberties Union of Texas.

The resolution concludes by warning publishers the "State Board of Education will look to reject future prejudicial social studies submissions that continue to offend Texas law with respect to treatment of the world's major religious groups by significant inequalities of coverage space-wise and by demonizing or lionizing one or more of them over others."

Social conservatives control the 15-member board for now, although the landscape is set to change after one member of the bloc lost his primary election bid and another chose not to seek re-election. The board in recent years has become a battleground for social conservatives and liberal watchdogs, each accusing the other of imposing ideological agendas into what about 4.8 million public school students learn in Texas classrooms.