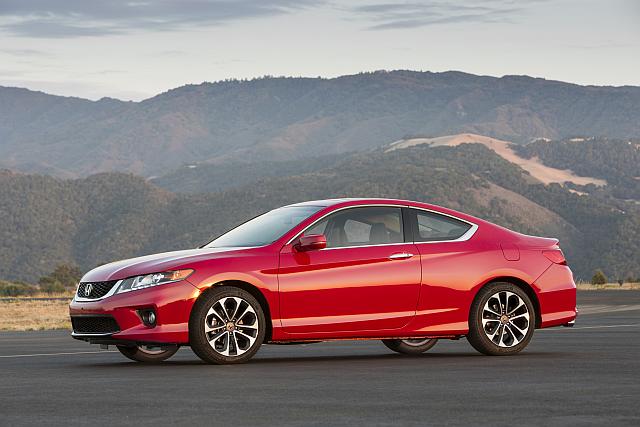 (MoneyWatch) After a lukewarm critics reception to its redesigned Civic last year, Honda has a lot riding on the new version of its Accord. At a New York event last week, I got to try out the Accord sedan, coupe and new plug-in hybrid version. The verdict: The Accord remains a contender for shoppers' attention in the crowded and competitive mid-size sedan class.

Weaving through traffic on city streets and at faster speeds on the West Side Highway, I especially loved one new feature: The best solution I have seen to warn drivers of blind spot dangers. A camera mounted in the right exterior mirror let me see on the navigation screen any potentially dangerous traffic as I changed lanes to the right. That feature, called "Lane Watch," plus a backup view camera standard on all price levels of the Accord, adds the kind of safety equipment found only in luxury models until very recently.

More safety is great, but of course you really want to know: How does it look and how does it drive and how much does it cost? In design, a low front end stance and a side crease running at the level of the door handles give the Accord a sleeker look than the car it replaces. You won't mistake the Accord, however, for a dramatic, eye-catching silhouette like the Hyundai Sonata. But Honda -- and most likely its loyal buyers -- aren't interested in moving that direction.

As for performance and mileage, redesigned four-cylinder and V-6 engines, plus the all-new gas-electric plug-in hybrid, boost MPGas federal gas mileage requirements continue to tighten. Here's a closer look at the driving qualities of the sedan, coupe and plug-in electric versions.

Accord sedan As always with Honda, shoppers have a lot of choices. The sedan, on sale next week, comes with either four-cylinder or V-6 engines and automatic or manual transmission. List prices range from $21,480 for a low-end LX model to $33,430 for a fully-loaded V-6 Touring version.

I drove the manual sedan with the 2.4-liter, 185-horsepower four-cylinder engine rated at 27 MPG in city driving and 36 on the highway. It lived up to Honda executives' description of being comfortable and quiet and nimble in handling through corners and curves. The six-speed shifter seemed smooth and effortless. Acceleration was nothing like the V-6 (see below), but lively enough for easy passing at highway speeds -- though a downshift to fifth gear helped with that.

Inside the cabin, an eight-inch screen was well positioned and easy for the driver to see with just a glance. This good visibility helps with everything from navigation maps to turning on Pandora radio. And when you activate the turn signal, the view of lanes to your right comes up on the screen.

Accord coupe The coupe has the same choice of engines and transmissions, starting in price at $23,350 for the four-cylinder manual model and ranging up to $32,350 for the V-6 automatic version with navigation.

I drove the V-6 manual coupe, and it is a much swifter driving experience (Motor Trend timed the V-6 from zero to 60 MPH in a quick 5.6 seconds). Quick acceleration not only from a standing start but even at highway speeds made it fun to drive, along with crisp handling. And the highway mileage is almost as good as the four-cylinder (34 MPG to 36 for the four) thanks to a system that shuts down three of the six cylinders when not needed at cruising speed.

Inside, the cabin looked more stylish than the sedan. Outside, the high tail and sloping line of the windows add to the sleeker look. But rear seat passengers won't have as much visibility as in the sedan, where rear windows are bigger. Of course, coupe buyers generally aren't too focused on hauling lots of passengers.

Accord plug-in electric Honda's competitor for cars like the Toyota Prius plug-in will not go on sale (or be priced or get MPG ratings) until next year, but I got to drive a prototype. This Accord delivered the torque-filled acceleration at low speeds typical of electric-powered cars. It is set up to go about 15 miles on electric power only until the battery starts to fade and the hybrid system, including the gas engine kicks in.

But the Accord gives you lots of control on driving mode. By pushing a button to put it into hybrid mode immediately, you can extend the time before the battery needs recharging. There is even a setting (B for braking on the transmission) for extra charging through regenerative braking. In stop-and-go traffic this is handy because the heavy brake drag means you don't have to hit the brake pedal as often.

When it comes to recharging, Honda engineers say the Accord plug-in can get a full recharge in an hour from a 240-volt charger that you can install in your garage or which is available at many charging stations.

Overall, the 2013 Accord seems to give Honda loyalists what they want with more power and better mileage and an intriguing new plug-in option.